The United Nations Framework Convention on Climate Change (UNFCCC) defined climate change as “a change of climate which is attributed directly or indirectly to human activity that alters the composition of the global atmosphere and which is in addition to natural climate variability observed over comparable time periods.”1

For everyday purposes, climate change refers to the myriad environmental processes disturbed by the human-caused emission of greenhouse gases. The effects of this climate change are observable: average air and surface water temperatures are rising globally, episodes of heavy precipitation and drought are increasing, oceanic disturbances are being recorded, and life on earth is being altered. It is worthwhile to note that climate, as distinguished from weather, is the long-term average of conditions like temperature and precipitation. Individual weather events (like a snowstorm or an unseasonably hot day) are not indicative of a long-term average change, and are not evidence of climate change.2

The root cause of climate change is well-established. Over the past century, industry and agriculture, primarily from the burning of oil, coal, and natural gas, has released enormous amounts of carbon dioxide and other heat-trapping greenhouse gases into the atmosphere. These emissions act as insulation, causing Earth’s surface temperature to rise. Oceans absorb about 80 percent of this additional heat, causing expansion and sea level rise. Oceans also absorb the carbon dioxide, which changes the basic chemistry of ocean waters and causes ocean acidification. 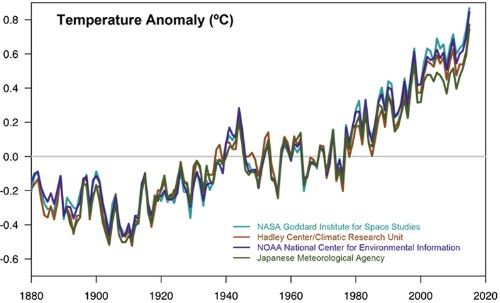 Temperature data from four international science institutions. All show rapid warming in the past few decades and that the last decade has been the warmest on record. Source: NASA

The Intergovernmental Panel on Climate Change (IPCC), a scientific body of the United Nations and leader in climate science, announced that its scientists are 95% confident that humans are the dominant cause of climate change since 1950.3 Multiple studies have found that at least 97% of active climate scientists agree that climate change in the past century is overwhelmingly human-caused. Countless scientific societies (meteorological, physical, geological, geophysical,...), the US National Academy of Sciences, and 11 international scientific academies have all stated their confidence that climate change is real and the likely result of human activity.4 There is an abundance of evidence, published across peer-reviewed scientific publications that point to this result. An outline of this evidence is presented below.

Earth’s climate system has changed in the past. The study of past climates--the paleoclimate--has been conducted using a wide variety of proxies, like ice cores, tree rings, pollen, and coral reefs. Across this wide variety of independently-tested methods, a consistent pattern emerged, indicating the natural variability of the climate system over hundreds of thousands of years. Since the industrial revolution, temperatures have risen at a rate 10 times faster than periods of transition following an ice age. Record temperatures, melting ice, glacial retreat, and rising seas are all demonstrable evidence of a changing climate.5 General Circulation Models--high-precision, supercomputer models that explore past and future climate scenarios--have shown that current changes cannot be seen in any models through natural variability alone; humans must be the cause.