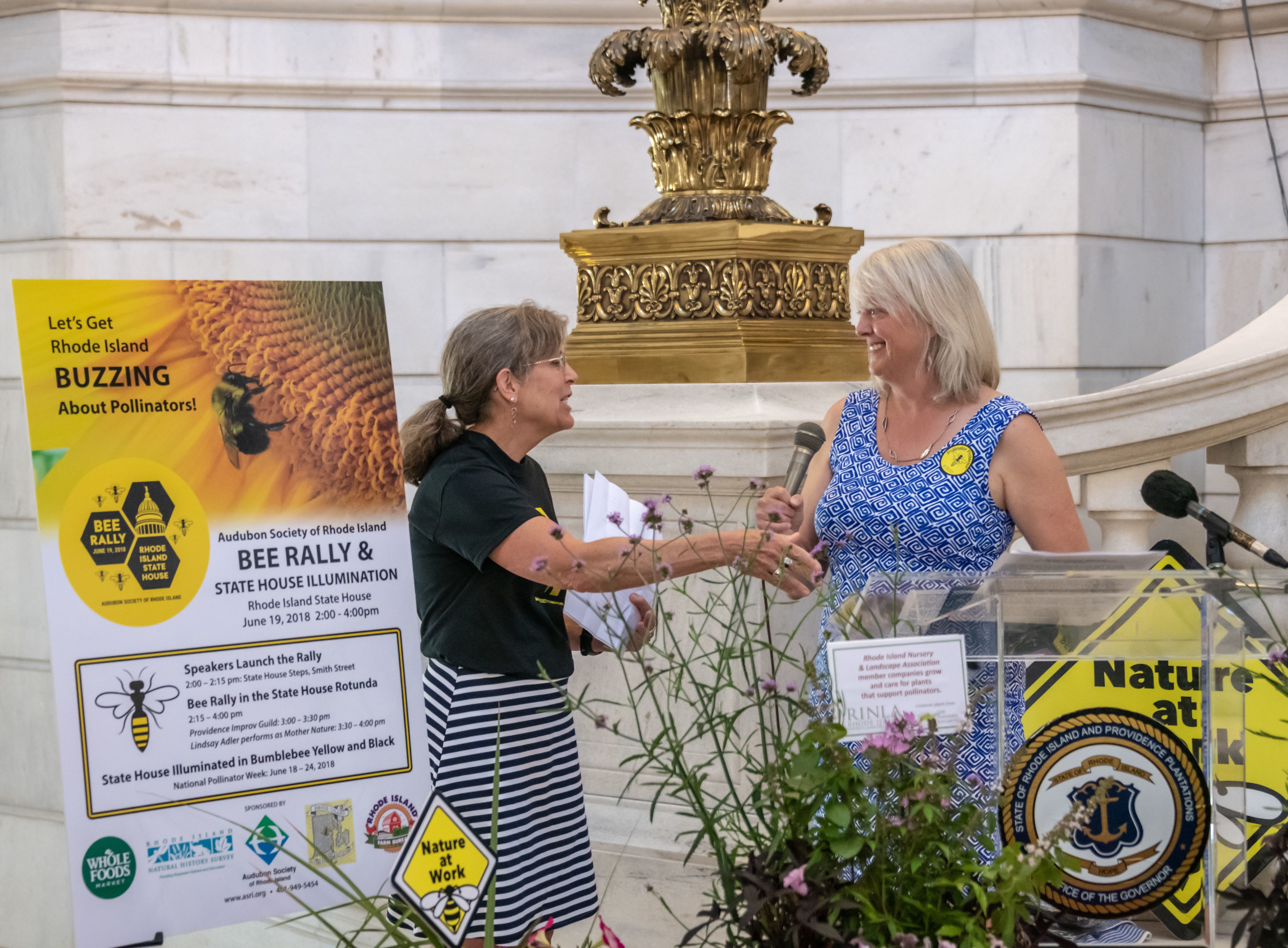 Meg Kerr (left) greets former RIDEM Director Janet Coit at the podium for the Bee Rally on June 19, 2018. Kerr orchestrated the event that brought hundreds to the RI Statehouse to support pollinator health and habitats.

Collaboration is Her Superpower

Meg Kerr started running regularly in college, and it soon became an addiction. She runs nearly every day, baseball cap on her head, hair pulled back in a ponytail, sensible sweaters or stylish scarves traded -- when weather permits -- for shorts and a T-shirt. Sometimes, says Amy Moses, director of Rhode Island’s Conservation Law Foundation, Kerr has been known to run down the steps from a meeting at the State House to get to a tennis match.

“It’s my mental thinking time,” Kerr says, “to solve my problems and the world’s problems.” She has run more than 20 marathons -- including the Boston Marathon, three times. And, she says, running those 26-mile races took determination. “The first one I signed up for, I got pregnant...And I was really frustrated,” she says with a laugh. “I was trained and ready to go, but I couldn’t find a doctor anywhere to tell me it was okay. “I finally ran 18 miles, because they said that was okay.”

Kerr’s laugh and smile are ready as she talks about her life and career. And her strength and determination are still evident as she heads for retirement after five years as senior policy director of the Audubon Society of Rhode Island, and three decades as an environmental leader in the state.

Even as COVID-19 has forced a halt to the in-person meetings with other environmentalists that she thrives on, she moved online with her work, including virtual training programs and the official launch of the Providence Stormwater Innovation Center, a partnership between Audubon and six other organizations.

“She was undaunted,” says Janet Coit, [former] director of the Rhode Island Department of Environmental Management. “She put on a virtual event, never missing a beat. That’s a legacy that will live on long after her.” (You can find the center, and its lessons for both the public and professionals, at stormwaterinnovation.org.)

Environmentalism isn’t just a job for Kerr. She was raised with it, at a time when Earth Day hadn’t yet been invented. “I was born in 1955, and my parents recycled,” she remembers. “They had to drive a couple of towns away to where there were bins, and we recycled. They composted. And my mother hung up laundry,” rather than using a dryer. “I still hang up my laundry. I like it that way.”

Kerr was raised in Pleasantville, in New York’s Westchester County, near New York City. She got her bachelor’s degree -- with honors -- in marine biology, at Brown University.

That’s where she met and married her husband, environmental toxicologist Bob Vanderslice. After graduation, they left Rhode Island, and she worked in a Florida lab for a year before getting her master’s in public health from the University of North Carolina.

But after a decade working in North Carolina, Virginia and Washington, D.C. -- she was a scientist with the U.S. Environmental Protection Agency -- the couple wanted to be closer to their families in the Northeast. So in 1990, they moved back to Rhode Island.

Since then, she has been a mainstay on the state’s environmental scene. With three and then four children, she worked part-time at first, then full-time, with the Rhode Island Rivers Council, the Narragansett Bay Estuary Program and Clean Water Action, before joining the Audubon in January 2016.

“Among the most important aspects of my job is finding the right people to help lead Audubon,” explained Audubon Executive Director Larry Taft. “When former policy director Eugenia Marks retired after 32 years of a stellar career, I knew that it would take a special person to fill her shoes and continue to move Audubon’s advocacy efforts forward.

“I knew Meg’s reputation as a respected voice for the environment and witnessed her skills first hand through her volunteer service on the Audubon Issues Committee. I was delighted when she officially joined our team. Meg has been a role model for Audubon staff, volunteers and supporters.

“Meg has directed Audubon’s policy issues with skill and determination for five years,” Taft said. “She also developed many strong partnerships along the way -- one of her greatest strengths. Wherever she has gone, she has built coalitions and friendships as well as policies and events.”

At the State House, Moses said, Kerr testified on a recent climate-change bill. “She brought home the impact climate has on birds, and told them about its importance to her [Audubon] members, who are voters. And there are thousands of them.” Thousands of voters meant a voice legislators might be willing to heed.

Priscilla De La Cruz, president of the Environment Council of Rhode Island, has felt the impact of Kerr’s gentle persuasion in her own life. While De La Cruz was still in graduate school and taking part in council meetings, she says, Kerr -- then the president -- phoned her: “I want to enlist you as president-elect.” When De La Cruz protested that she wasn’t ready, she recalls, Kerr reminded her that “I stepped up to be the president ... because no one else would.” Now she was looking for a new generation to take the reins. Besides, De La Cruz would only be agreeing to become president-elect; “you have a year to decide” whether to actually be president. And after a year, De La Cruz adds with a chuckle, “there I was, taking on the role. As she knew I would.”

State Rep. Lauren Carson, a co-founder of the Coalition, praises the focus, discipline and “unique leadership skills” Kerr has brought to the group. “She’s the backbone of it,” Carson says. “She keeps us on track.” Kerr has a “wealth of knowledge,” she adds, even of things most environmentalists might miss. Recently, Carson wanted to let Kerr know about a bill that wasn’t in the environmental affairs committee, but in the small-business committee, where it would be easy to overlook. “Lo and behold, Meg had already seen it,” Carson says. “That says a little about her being thorough.” Carson echoes Kerr’s other friends and colleagues in saying her retirement leaves “huge, huge shoes to fill.” But they also emphasize that just because Kerr is leaving her job at Audubon, she’s not going to stop being connected to, and involved with, the environmental community. “Meg is not going anywhere,” Carson says. “We’re already trying to figure out new roles for her.”

Still, Kerr’s life will change. And that’s okay with her. “I’m happy to still be here,” she said in February, as her retirement neared. “I love to work. I love the people I work with.” But, she said, she’s old enough to retire. And just as she once wanted to spend time with her children, now she wants to be with her grandchildren -- there are three, with a fourth on the way. “There’s only so many hours in the day,” she says, “and I’ve got other things I want to do. Like run.”

Alan Rosenberg is a retired executive editor of The Providence Journal. Reach him at AlanRosenbergRI@gmail.com.