Biodiversity is defined as the number of unique species supported in a region. It is an indicator of ecosystem of health and resiliency. The combined effects of warming, habitat loss, and storm disturbance are likely to cause Rhode Island’s biodiversity to decline.

The ecological effects of climate change will manifest in multiple ways. The geographic range of many species will be driven northward. Seasonal responses, such as budburst on flowering plants, will occur earlier in the year. Changes in physiology and behavior will also be observed. Through ecological linkages, disruptions to one area of an ecosystem can affect species throughout. Early flowering, for example, can be harmful to animal pollinators, a group already ravaged by habitat loss, pesticides, and disease.

Both aquatic and terrestrial ecosystems will be affected by climate change. Salt marshes, critical coastal habitats, will likely be eroded by high sea levels and coastal flooding--sea level rise has led to the loss of nearly 20% of Rhode Island’s salt marshes in recent decades. Inundation is changing plant species in salt marshes and forcing the displacement of birds like the Great Blue Heron and Saltmarsh Sparrow. Narragansett Bay is experiencing a degree of warming that is already changing its species composition. Acidification from dissolved carbon dioxide is deteriorating the exoskeletons of shellfish.

The National Audubon Society reported that 314 North American bird species--including 50 species that range into Rhode Island--will see shifting or shrinking of their breeding and wintering ranges. Furthermore, changes in seasonality will alter the availability of food, especially for birds that migrate long distances and are less able to acclimate to changes in the timing of insect flourishing and the fruiting and flowering of plants. For example, the reproductive success of the Cerulean Warbler is tied to the caterpillar bloom, which has come increasingly early with rising temperatures and has starved these unadjusted birds.

Rhode Island birds are on the brink. Rising temperatures have caused ranges to shift and constrict; seasonal changes have disrupted breeding; flooding has drowned habitats and nests; and storms have disturbed habitat. The fate of our birds and the diversity of Rhode Island’s animal and plant species rests in our hands.

Birds on the Brink in Rhode Island (From the Audubon Report: Volume 51, No. 1) 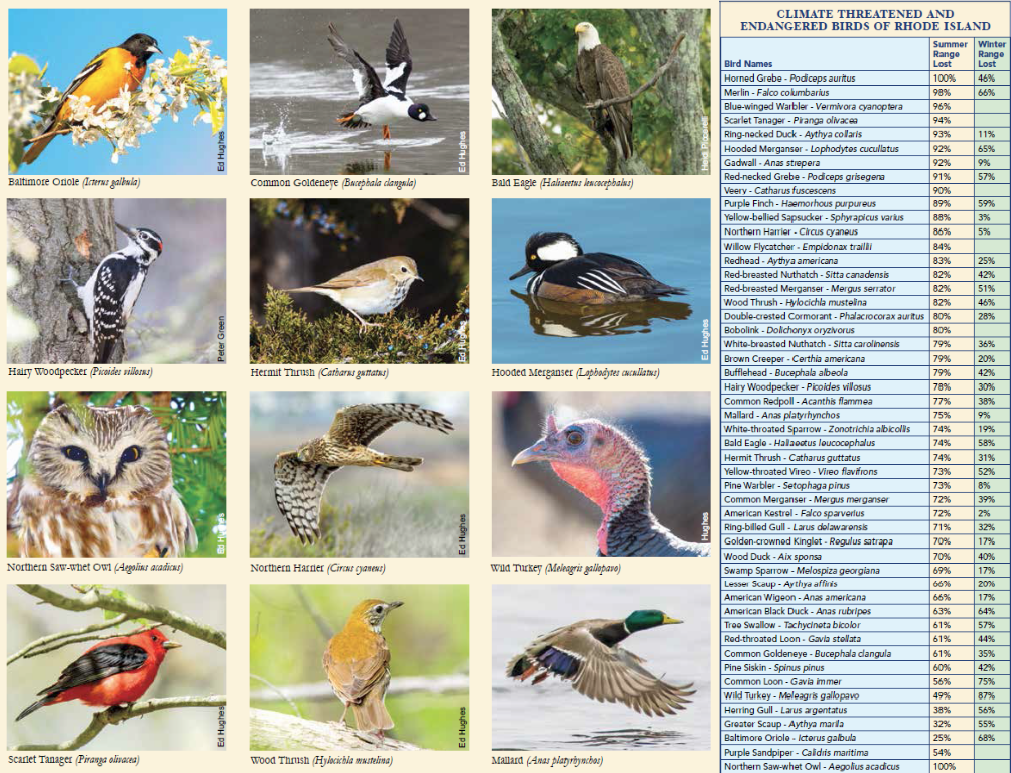 The Providence Journal has covered these issues: