Wind is driven by temperature differences along earth’s surface caused by uneven solar heating. Wind is a vital carrier of kinetic energy in the global climate system, and its energy can be harnessed by turbines to generate electricity. Turbines may be optimally placed in areas that are near water, have few natural barriers, are at high altitudes, or exist between physical barriers where winds may be intensified. Rhode Island’s reserves of wind energy are located primarily on the coast and offshore. 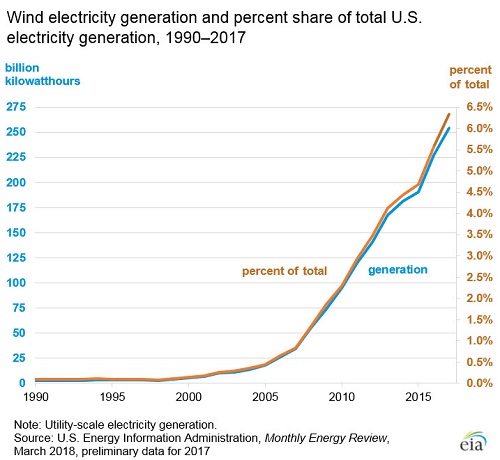 Wind power plants, also known as wind farms, consist of multiple turbines generating electricity at a single site. California’s Alta Wind Energy Center, the largest in the United States, has 600 operational turbines. Texas, the country’s leading producer of wind, and states like California and Oklahoma all have the benefit of large, undeveloped open spaces—a benefit Rhode Island cannot afford. Limited onshore wind capabilities in the state are disseminated through small-scale commercial and municipal projects. However, Rhode Island is a leader in offshore wind. The Block Island Wind Farm, the first offshore wind power plant in the United States, is a five turbine, 30 megawatt demonstration. This project inspired Rhode Island and Massachusetts to commission an additional 400 megawatts and 800 megawatts of offshore wind, respectively, in May 2018.

There are caveats to wind energy that should not be neglected. Turbines are large structures with aloft blades, making them a potential danger to bird and bat populations. Additionally, the possibility of malfunction and failure exists with these machines, which can lead to leaks or other forms of pollution. Turbines also utilize rare earth metals. These materials are often mined in countries with weakly enforced environmental regulations, making them most susceptible to mine pollution. Despite these caveats, wind energy is renewable and emissions-free. Wind, in combination with other renewables, is necessary to reduce fossil fuel dependency and mitigate climate change, one of the greatest environmental problems in the world today.