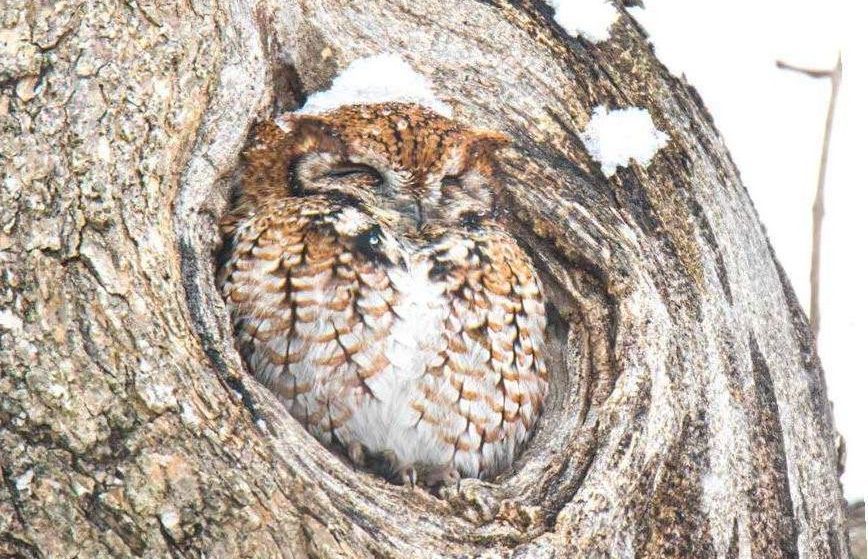 The shorter days and declining temperatures in autumn are a key signal to wildlife that it’s time to make preparations for winter. For some, that means changing their diet, bulking up, and taking off for distant destinations with warmer temperatures. Others stockpile food in anticipation of a long winter nap, while those that remain active throughout the winter make more modest preparations. Yet for all New England wildlife, the steps they take to prepare for winter are vital to their survival.

In mountainous regions, some animals like deer and elk migrate vertically from upper elevations to valleys to escape the snow and freezing conditions. Some butterflies and dragonflies, most notably monarchs, migrate long distances to escape the cold and to find their preferred food, too. Others, like bats, migrate to sites with the precise environmental conditions they require for their winter hibernation. In the case of Rhode Island’s bats, most migrate in the opposite direction of the birds they go north to caves and mines in New Hampshire, Vermont and northern New York.

“As the climate changes and winter temperatures rise, we may end up with fewer true hibernators and more occasional sleepers because they won’t really need to totally hibernate anymore,” added Carberry.

Insects do something very different, however. In most cases, the adult insects moths, beetles, grasshoppers and others die prior to the onset of winter, but their offspring survive the winter months in earlier life stages. Most butterflies and moths overwinter in a chrysalis or cocoon the stage between caterpillar and adult and are ready to emerge as flying adult insects as soon as the weather warms up. Young spiders often overwinter in egg cases hidden in log piles or under ledges except for those that are hidden in the nooks and crannies inside our homes, where they may remain active all winter.

How plants survive the winter is a totally different story.

“They can’t move, so they have to deal with whatever conditions are here,” Ruhren said. “And they deal with it in a lot of different ways."

It’s just one more of the dizzying variety of strategies that local wildlife have evolved to sustain themselves through the challenges of a New England winter.