While hiking on an Audubon refuge, finding the remains of a cottontail rabbit or a piece of fur in a field are obvious signs that a predator has been nearby.

Predators are consumers within a food web. Most are true carnivores, only occasionally eating fruits and other plant parts. Predators help control the populations of the consumers below them such as rabbits, mice, voles and other small mammals. This is such a crucial role in ecosystems that predators and prey often cycle together, rising and falling with each population change.

Humans have a long history of persecuting predators, sometimes even eradicating species. Many native predators were eliminated from New England through hunting and trapping for furs, exaggerated fear, and habitat destruction over the past several centuries. The perils of removing predators from habitats are well known in the science community. Worldwide, in habitats where predators have been suppressed, the herbivores such as grazers and browsers, became overabundant. Luckily, key predators have been naturally reestablishing in many of these habitats. Several mammal predators have been increasing in Rhode Island over the past couple of decades. These include coyotes, bobcats, and fishers. 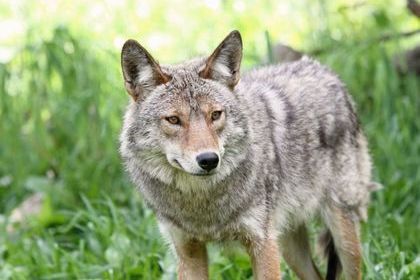 Coyotes are probably the most well-known of the rising three. These animals and their signs (tracks and scat) can be found at most Audubon wildlife refuges. Coyotes are doing well in most areas of Rhode Island after moving back into New England by themselves and becoming common in the past 30 years. They were not moved here. These animals form loose packs that occasionally hunt in groups and can often be heard howling at night, often a signal that they have found food or during mating season in late winter. Our “new” coyotes may have mated with wolves in western states, as their populations moved back east. This could explain why eastern coyotes are so robust. Animals range from gray to various shades of brown, with coats getting thicker in winter 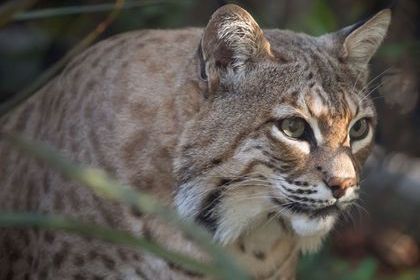 Bobcats are quiet and more reclusive animals. Compact and muscular, male bobcats can weigh as much as 50 pounds. Solitary animals that come together only to mate or raise their young, bobcats prefer small mammals such as rabbits and mice. Though their numbers are much lower than coyotes, they are more common than expected. Their thick pelt allows them to be active even during the winter and the mottled fur pattern helps them camouflage. Their tracks are distinctive, since cats usually do not show their claws in mud and snow, compared to dogs, coyotes and fox. Bobcats also scrape soil and bury their scat like domestic cats and may even cover prey that they have caught. 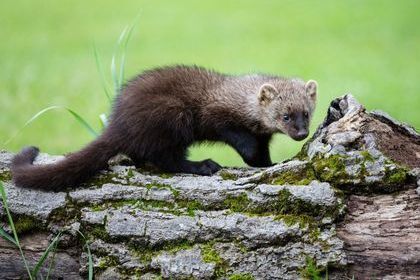 Fishers, often called “fisher cats,” are native weasels still trapped for their thick fur. Like coyotes and bobcats, fisher moved back into Rhode Island, seeking forested habitats. They are capable climbers often pursuing prey in trees and are legendary for being one of the few predators of porcupines. It is more accurate to call fishers omnivores because they will consume mushrooms, ferns, and fruits in addition to meat.

Perceptions of predators can cloud people’s understanding. A long history of children’s stories, movies and illustrations have made it difficult to separate legend and misinformation from scientific facts. Today, people are told that fishers are bloodthirsty animals that will attack people. Coyotes too have often been implicated, but not verified, in attacks on humans. This is rare.

Furthermore, it is important to remember that these three species are wild animals. They should be kept at a distance and should not be fed human food. Wild animals that are fed tend to change their behavior and may not respect the boundaries needed to keep animals and people safely apart. Pets should not be let out to wander in their habitat. Predators do not discriminate between a small dog or cat and wild animal prey. Observed from a safe distance, it is a reward to see these mammals in the wild. Their presence helps maintain the order and function of Rhode Island’s ecosystems.