Spring Needs to be Noisy, and So Do You.

Few people know that Rachel Carson never lived to see the impact she had on this world. She never heard the protest songs of throngs of passionate environmental activists marching in her name. She never knew she had been credited with instigating the modern environmental movement in our country. Instead, she spent the short time she had left on this planet after the publication of her most significant body of work fielding ridicule and contempt from pesticide manufacturers and skeptics. Miss Carson died only two years after publishing Silent Spring. The biologist who was so passionate about bringing back our beleaguered wildlife populations never lived to see the banning of DDT or the resurgence of our birds most heavily affected.

When Rachel Carson passed away on April 14, 1964, the spring was still silent, the Bald Eagle population of the conterminous US was down to the lowest level ever recorded (approximately 400 pairs), Peregrine Falcons were extirpated East of the Mississippi River and the waterbird-rich state of Louisiana had lost its iconic population of Brown Pelicans. At the time of her death, the world must have seemed quite bleak. It wasn’t until decades of hard work and the acknowledgement of the truth behind her writings that we find ourselves today with a recovered Bald Eagle population (estimated at over 300,000 individuals in the lower 48 states) and the ability to log-in to a webcam and watch nesting Peregrine Falcons right here in the Ocean State. 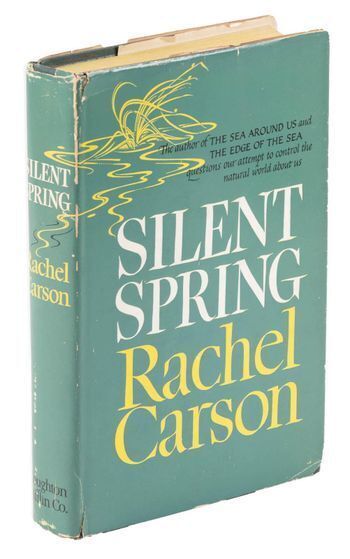 Rachel Carson was attacked for her work on two fronts. On one, powerful corporations scared to lose profit and grapple with a PR nightmare condemned Miss Carson and her bold observations. In fact, there are groups that continue todaay to blame Rachel Carson for the plague of malaria that has yet to be vanquished from parts of Africa. Their argument largely posits that the removal of DDT from our arsenal of mosquito control efforts has reduced our capacity to control the virus. Of course, this is not only false, but it also suggests that the purveyors of this mindset haven’t even read the book or acknowledged our failures with regards to international policy and humanitarian aid.

The second, and more insidious form of attack that Miss Carson was forced to endure was one levied against her for something she had no control over…her sex. Four decades after the ratification of the 19th Amendment, misogyny and sexism still hampered the success of female visionaries across our country. Rachel Carson was just a single casualty in the thinly-veiled attempts by power-hungry individuals to label women as emotional beings unable to produce rational arguments due to their biology. After the publication of Silent Spring, one letter to the editor of the New Yorker stated “…isn’t it just like a woman to be scared to death of a few little bugs!” (cited in Smith 2001, 741).

Today, in 2022, we have made great strides towards environmental health as well as equity and inclusion within human society. But, advances are still greatly needed on both of these fronts. Science is objective and real and women are equal members of society that deserve a seat at the table. Until these two fundamental truths are accepted universally, we will continue to suffer setbacks in our attempts at progress.

The Audubon Society of Rhode Island is dedicated to making our stance regarding science, equity, inclusion and compassion clear. If you don’t support the scientific process, data-driven conservation AND the recognition that all humans deserve respect and a voice, you should probably go find another organization to support. As a scientist and a great admirer of all those visionaries that have spoken up to make our world a better place, I refuse to work anywhere that would discount the thoughts and opinions of someone else simply due to their sex, race, religion or sexual orientation.

I don’t know about you, but I do not want to leave this world when things seem bleak and hopeless for the wildlife I have devoted my entire life to conserving. I can’t imagine the thought of leaving behind a planet for future generations that is stunted and failing…a shell of the biodiverse planet it once was. This was the unfortunate situation surrounding Rachel Carson’s death. Although she did not bear witness to it, our springs are once again noisy and the crisis of DDT has abated. Now it is time for us to pick up the baton and continue making progress in the name of science AND in the name of women.