The Case Against Neonicotinoid Insecticides is Growing

Audubon will monitor birds in Rhode Island for the presence of neonics.

STATE OF THE BIRDS | By Dr. Charles Clarkson, Director of Avian Research 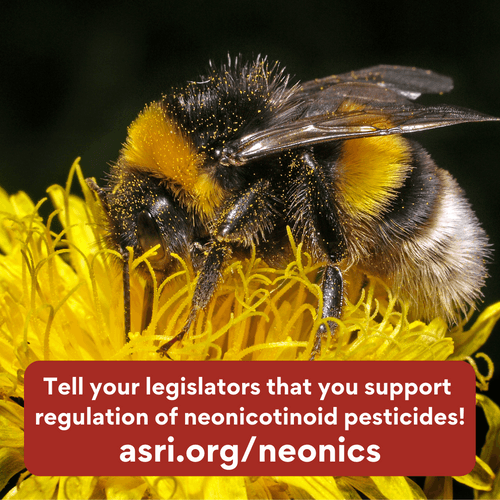 Perhaps the biggest danger of new technologies are the unintended impacts that they cause to ecosystem health and function. Examples from our history abound: Naval sonar, developed to detect submarines, has been shown to cause the stranding and death of cetaceans, such as whales and dolphins. When humanity began burning coal to produce electricity, mercury released during combustion made its way into aquatic habitats where it was absorbed by marine organisms and negatively impacts wildlife populations including fish, amphibians, birds and even humans to this day. The global shipping industry has inadvertently contributed to the rapid introduction of invasive species the world over. Zebra Mussels, an extremely pervasive mollusk, has infiltrated our country’s waterways via container ship ballast water. The bioaccumulation of pesticides within a food web was the severe and devastating unintended consequence of DDT. Raptors and waterbirds suffered dramatically as the chemical prevented calcium deposition resulting in eggshell thinning and outright reproductive failure. The impact was so severe we almost drove our own national bird to extinction (when DDT was finally banned, the Bald Eagle population in the lower 48 was only around 400 pairs. By comparison, there are over 300,000 Bald Eagles in the same area today).

Neonicotinoid Insecticides (Neonics) were introduced on our landscape in the 1990s. This makes them a very young form of pest management and the impacts of their use are only now coming to light. And the impacts are cringe-worthy: Neonicotinoids have been implicated as a key factor in the decline of pollinating bee species, they are responsible for delayed migration in certain species of birds and they are known to infiltrate aquatic habitats where their impacts are still unclear. The insecticides are so pervasive and damaging to ecosystems that the European Union has banned their use. The evidence that these chemicals impact our ecosystems in adverse and potentially devastating ways is building. A quick internet search of recently published research articles on Neonics yields results showing their negative impacts on the health of adolescents in China, their adverse effects on water quality and their ability to alter the nectar chemistry of plants. A particularly bleak study, published in April 2022 documented that Neonics were present at detectable levels in 89% of a population of Sandwich Terns (Thalasseus sandvicensis; Distefano 2022). The fact that ocean-going, fish-eating birds would accumulate pesticides applied to agricultural zones demonstrates the ability of Neonics to have far reaching effects across the landscape.

This summer, Audubon will begin monitoring birds from across the state for the presence of Neonicotinoid Insecticides. We will be partnering with other entities, including the Aquidneck Land Trust, to obtain samples from bird populations throughout the state. The ultimate goal of this research will be to understand just how pervasive Neonics are. A number of resident species of birds remain on Audubon wildlife refuges year-round. In theory, birds residing on protected land should be insulated from the impacts of Neonics and other pollutants, but in light of recent studies, this assumption is not necessarily a safe one. Through the collection of feather and fecal samples, we will be able to determine if Neonicotinoids are present in our birds and to what extent. These data will be inordinately important for guiding legislation by arming our advocacy team with hard science to support their stance on regulating the use of these harmful pesticides.

With growing evidence that Neonicotinoids impact so much more than their intended targets, it is incumbent on us to spend time and energy scrutinizing their use in our state. Rachel Carson would have begged this of us, and we should all be listening.

Carolina Wrens and Tree Swallows are two species that will be monitored by Audubon for the presence of neonicotinoid insecticides. Images by Stephen Tierney and Peter Green.