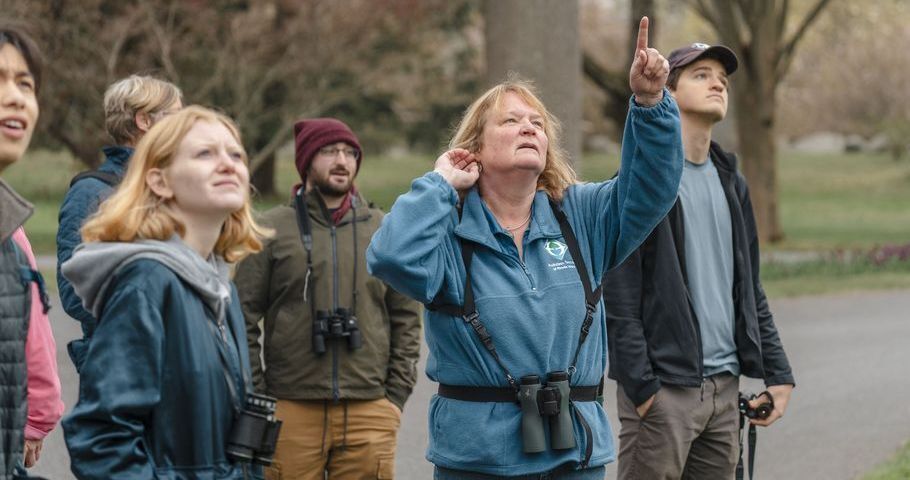 Audubon Senior Director of Education Lauren Parmelee shares her knowledge and passion for birding with students at Brown University.

The Lessons Birds Can Teach Us

On a cloudy morning in late April, Senior Director of Education Lauren Parmelee is leading a bird walk through the historic Swan Point Cemetery in Providence. Following her, equipped with cameras and binoculars, is an attentive flock of undergrads from Brown University. As she walks, eyes trained on the treetops, Parmelee maintains a running dialogue, both talking about — and to — the birds. 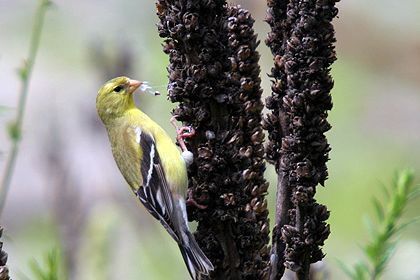 “A goldfinch has a lemony head,” she announces. “Really lemony. And a bill like a triangle.” She mimics a Tufted Titmouse: “peter-peterpeter!” — and offers five dollars to the first person who spots a woodpecker. And then, identifying the call of a Northern Flicker, answers back with an “ah-ah-ah-ah!” She spots two Blue Jays, one with a caterpillar in its mouth. “Their color doesn’t pop on an overcast day,” she says wistfully. She watches and narrates the perfect landing of an Egret at the edge of the Seekonk River (“aaaand … thank you!”). Moments later, the find of a perfect, lush feather of a Turkey Vulture begets a lesson in quill aerodynamics.When

Parmelee talks about birds and birding, not only does her face light up, but her commentary is accented by such words as joy, delight, magic, gem — and fun. She takes joy in the presence of birds, and finds great delight in the happenstance of birding. Case in point: a moment last year at the Neutaconkanut Hill Conservancy in Providence. 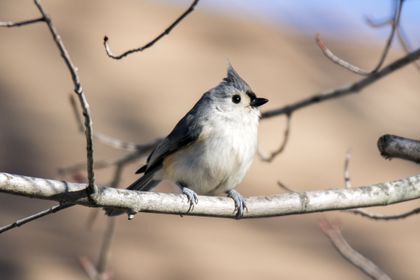 Standing at the base of a tree with a group of students, ears tuned for the call of a woodpecker, Parmelee pointed out a series of small drill holes — telltale marks of a Yellow-bellied Sapsucker, the woodpecker’s more migratory cousin. And then, as if on cue, one flew in and landed in front of them. “I could not have made that up,” she says. “It was magic.”

Yet there is a more purposeful side to the magic and what Parmelee calls “the joy of it.” Audubon provides after-school and summer camp programs to more than 12,000 Rhode Island schoolchildren — one of

“Birding enables anyone—regardless of age, experience, ability, or location—to feel tied to a place. Anyone can bird.”

the largest environmental educators in the state. She has been at this job for six years, working as liaison between schools, educators, cities and towns on one side, and state and government agencies on the other. Recipients of her attention include the Rhode Island Department of Education, the Rhode Island Environmental Education Association, the Providence Parks Urban Wildlife Refuge Partnership, and the U.S. Fish and Wildlife Service, as well as a pool of donors and like-minded non-profits — wherever she sees a potential resource. A large part of her focus is the elementary-school Audubon Explorers and the middleschool Urban Naturalists who participate in the after-school programs around the state. “As many kids as we can serve,” is how she puts it.

Parmelee’s goal is to “reach out to public schools in urban areas, and to serve those students who don’t always have access to the outside.” In that spirit, she has been keeping a watchful eye on the No Child Left Inside Act (H.R. 3036), introduced last April, with R.I. Sen. Jack Reed among the three sponsors).

Also on hand at Swan Point that April morning is Nancy Jacobs, an environmental and social historian at Brown, and kindred spirit — since 2016 — to Parmelee’s exuberant bird talk. The students are enrolled in ENVS 1577: Birding Communities, Professor Jacobs’ seminar exploring the cultural, socioeconomic, and gender-identity universe of birdwatching. Parmelee introduces Jacobs’ nestlings to birding, and readies them for heading out into the community as bird-savvy educators.

The partnership is one of Audubon’s more interesting pairings. 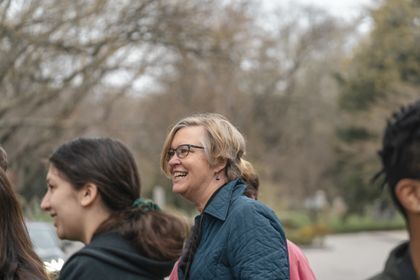 Professor Nancy Jacobs (right) is an environmental and social historian at Brown University who engages her students in the cultural, socioeconomic, and gender-identity universe of birdwatching.

Walking along are the twenty students enrolled in Jacobs’ course, plus a handful of curious friends. Officially added to the Environmental Studies curriculum in 2019, Birding Communities has created a bit of a buzz. With the precision of a jeweler, Jacobs places her 21st-century loupe over a decidedly 20th-century figure: the “old white male birdwatcher.” It was while studying birds twenty years ago as a grad student in South Africa that she discovered an all-inclusive birding culture in stark contrast to her experience on this side of the Atlantic. “Since then,” she emailed from Uganda in June, “I’ve done research on vernacular bird knowledge in Zambia, Cameroon, Ghana, and now Uganda.”

Jacobs touches on everything from white privilege (“the politics of knowledge”), gender politics and cultural distinctions (“the vernacular of birding”) to gender identity and economic inequity; and access for all to the out-of-doors. Students keep a journal and complete a final project.

For reading assignments she gets good backup from the national Audubon magazine, including a 2018 article on the comfort zone of birding for the LGBTQ community, and one written in 2019 featuring the “Birdpunk” culture. Both prompted Thomas Patti, who was in the April group, to write in his journal of seeing both a sprig of hope in “learning the diverse stories of underrepresented groups’ love affairs with birds and nature,” but also wariness. “How can we scale up inclusivity? From what I’ve gathered from this course,” he concludes, “there is no easy answer.” 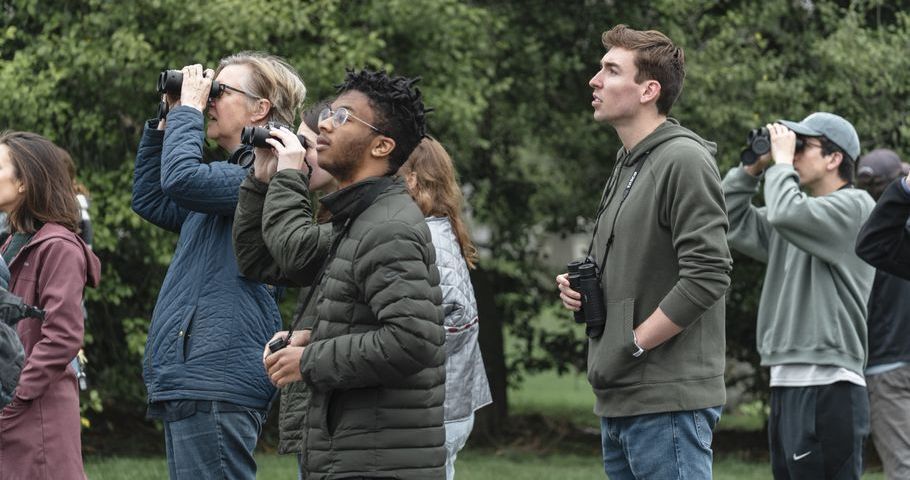 Jacobs and her students birding in Swan Point Cemetery in Providence. Class images by Morgan Holstine.

The word “communities” Jacobs incorporates into the course title has its own narrative. Her students are learning not just the basics of ornithology. They are also being made privy to the universality of birding, and are being instructed to take what they have learned back into the communities — to after-school programs, many of them within walking distance of Brown’s doorstep. These are also, to use Thomas Patti’s words, underrepresented communities: Many of the children they encounter do not have access to back yards, or even to the out-ofdoors. “Sometimes it just might not be in the family culture,” Parmelee says. “It’s just not a part of their lives.” For her, the thought of a child not having easy access to the out-of-doors is unfathomable. “My father was an old Yankee soul,” she explains. “He was frugal and felt that being outside was good entertainment.” In previous years, as part of a mentorship program, one Brown University student created a Spanish-English birding guide for the parks and woodlands of Providence — something that not only the children, but family members could use as well. Another, while presenting the concept of bird migration to children whose families had come from Mexico and other Central American countries, came up with the brilliant idea of working with them to share their families’ own personal experiences with migration.

Gradually, the issues Jacobs and her students are exploring — and have often experienced — are being brought into the sharper focus of Jacobs loupe. Audubon, in fact, answered that challenge with a statement issued in late May from the Board, recognizing “that there is much work to be done to become the welcoming, inclusive, and diverse organization we wish to be.”

With the face of the birding community becoming ever more diverse, Parmelee continues to reach out and to teach the universal wonder of birds — in Jacobs’ parlance, “a charismatic and conspicuous class of animals.”

There is a lot to learn from birds. Adam Gendreau, also in the group that day, wrote an article for Brown’s online environmental magazine, The Forager Zine, chronicling his experience. “When I registered for the course Birding Communities,” he began, “I could count on two hands the birds I could identify, and I had never even heard of the phrase ‘birding community.’” The young birders from Brown who come to make haste and fulfill a course requirement end up, in Gendreau’s words, undergoing “a gradual, yet powerful, transformation… Birding enables anyone — regardless of age, experience, ability, or location—to feel tied to a place. Anyone can bird.”