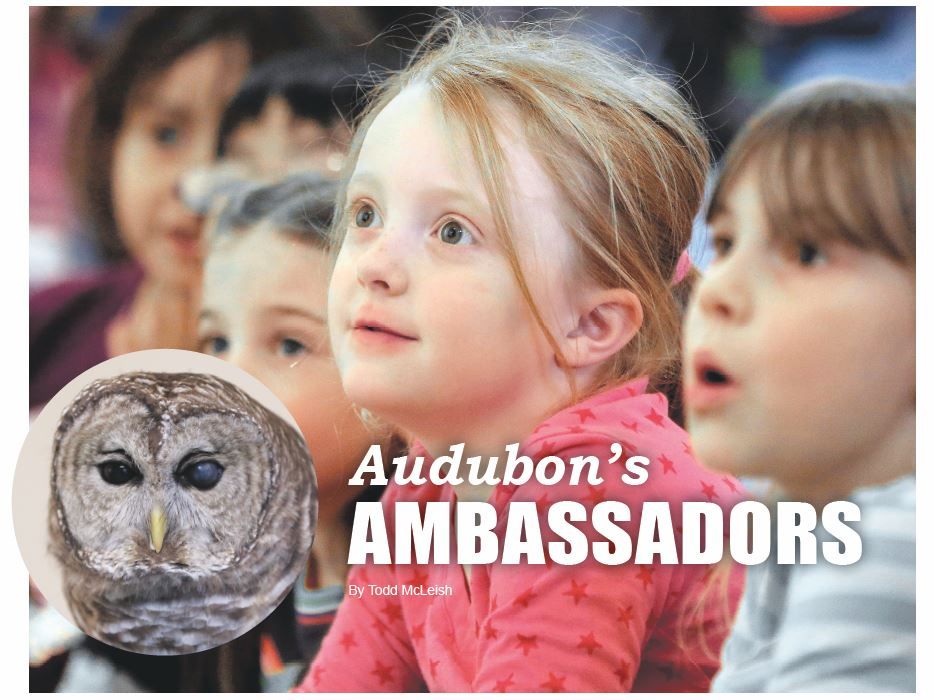 A boisterous group of 50 kindergarteners from the Melrose School in Jamestown gathered at the Audubon Nature Center and Aquarium in January for a morning of lessons and activities about animal adaptations, wildlife habitat and other topics. They were clearly excited as they participated in a scavenger hunt and discussed the diet and behavior of owls.

Then, sitting with legs crossed and enthusiasm temporarily contained, they waited patiently for what would undoubtedly be the highlight of the day – a visit from Eec, a live Barred Owl that serves as an animal ambas­sador during educational programs around the state. This owl is cared for by Audubon as she was permanently injured and cannot be released into the wild. Perched on the gloved hand of Sharon Riley, Audubon’s educa­tion and animal care specialist, Eec calmly peered around at the assembled children, who were filled with unending awe for the bird.

In response to questions posed by environmental educator Lisa Maloney, the children noted the bird’s camouflaged appearance, its yellowish beak, the location of its ears, and many other features that make owls such successful predators and so endearing to people of all ages. And when the bird was finally carried back to its cage, the children yearned for more time with the distin­guished bird. 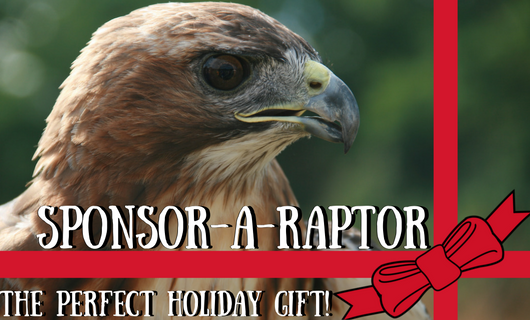 "It’s one thing to tell them about an owl,” said Riley. “But what they’re going to remember most is seeing that owl. Having the ability to bring an animal to a school group close-up like that is something that’s much more meaningful than just a discussion. It gives them a real connection with the natural world.”

Eec – named for the initials of the Nature Center’s former name, the Environmental Education Center – is one of more than a dozen raptors, reptiles and other creatures that play a vital role as animal ambassadors in Audubon’s popular environmental education programs. Along with hawks, ravens, turtles, snakes, hissing cockroaches and tidepool animals, Eec and her fellow owls command attention in a roomful of curious children and adults, and they distinguish Audubon from the many other organizations that offer environmental science programs in the region.

“Audubon is known for its birds, so being open to taking in an injured bird and showcasing it in our programs is a natural fit,” said Lauren Par­melee, senior director of education. “We can go all over the state with these animals, and people are especially fascinated by owls. They help us hook the audience in.

“Teachers know that to get science concepts across, it helps to have some kind of special guest in the classroom,” she added. “There’s nothing like an up-close experience.”

It’s obvious by the student reaction that the visit by Eec was impactful.

“My kids are totally excited when they see the owl,” said Beverly Green, one of three Melrose School teachers who brought her students to the Nature Center. “Most have never seen an owl, and they’re very curious and want to know why it’s here and not out in the wild. It’s an amazing experience for them.”

Green and her colleagues Colleen MacIntyre and Jane Mitchell have participated in Audubon education programs with animal ambassadors every year for more than 15 years, and they say that it helps spark an interest in nature.

That message is more easily conveyed when audiences are engaged with an animal ambassa­dor, especially an owl or hawk.

“All of us who work in environmental educa­tion are trying to get the same message across, and our animals help us do that. They are our niche,” Parmelee said. “The birds make us stand out and help us bring our message of the impor­tance of biodiversity, habitat conservation and good science.”

The animals – which are unreleasable due to an injury or other issue such as imprinting on humans – clearly leave a memorable impression with the public.

Zachariah, a Common Raven acquired two years ago from a rehabilitator in Maine, also makes a big impression when observed up close. His mas­sive beak and interesting variety of noises often catches audiences off guard.

Parmelee and Riley recalled a program at a Providence middle school when the students remained absolutely silent throughout their visit with Zach. “It was like pulling teeth trying to get them to answer a question or say anything,” Riley said. “They just silently stared at him. But as soon as we put him away, they wouldn’t stop talking about him. Turns out they were intimidated by his giant beak. Later, one of the students told me that, because of Zach, ravens are now his favorite animal.”

Zach is one of two Common Ravens, two Red-tailed Hawks, and Eec the Barred Owl that call the Nature Center home. They are joined by a corn snake, two ball pythons, three kinds of turtles, and five hissing cockroaches that serve in an educa­tional capacity. Starfish, whelks, hermit crabs and other tidepool animals in the Nature Center aquarium are sometimes used in programs as well. There are also has a number of other raptors, snakes and turtles that are cared for at other Audubon locations across the state.

“The turtles have such interesting adaptations and have a lot of person­ality. Kids really like turtles,” Parmelee said. “They’re hardy creatures, they don’t get stressed, so they’re popular at our summer programs. We even have turtle races at summer camp.”

For some people, the snakes take a little getting used to, but they are gentle animals and easy to transport, so they are used often in classroom programs. Some audiences are squeamish with the cockroaches, too, but they are helpful in comparing vertebrates and invertebrates.

DiMonti explained that if an animal is on exhibit, its appearance in edu­cational programs must be limited as the combination can be too stressful. Finn and Atlanta, the two Red-tailed Hawks on display behind the Nature Center, are seldom used in public programs.

Caring for the wide variety of animal ambassadors is a job that few people see, but it’s a time-consuming, expensive responsibility that Audubon takes very seriously. It involves a great deal more than just providing food and periodically cleaning cages. There is never a day off with so many animals and the Nature Center in Bristol is just one of the locations where there are animals needing daily care.

Raptors aren’t the only animal ambassadors that Audubon uses in education programs. Turtles, snakes, and even hissing cockroaches all have an important role in educating the public about the environment.

The monthly grocery list for the animals includes frozen mice, chicks and quail for the raptors and snakes; vegetables for the turtles; and for the omnivorous – and picky – ravens a menu featuring raw meatballs, chicken gizzards, hard-boiled eggs, dry dog food, cat treats, nuts, vegetables and dried cranberries.

“The ravens are very big on texture,” said Riley, whose first responsibility every morning is feeding the demanding ravens. “They like their vegetables mushy and their fruit crisp. It took me a while to figure out what they like and don’t like. And they’ll let me know when they want something else.”

The food for each of the raptors and ravens is weighed every day so the birds are never overfed or underfed. The Red-tailed Hawks receive 90 grams of mice or quail each day around noon, the Barred Owl receives 45 grams of mice or chicks at dusk, and the ravens receive 50 grams of protein supplemented with fruit and vegetables. The adult snakes are fed a mouse or chick every other week, and the turtles, cockroaches and other animals have varied feeding schedules.

“It’s a big responsibility, but it’s become such an important part of who we are,” concluded Parmelee. “In order to get our message across, you have to grab people’s attention. Our birds of prey, turtles and snakes do an awe­some job of engaging kids and adults and introducing them to the wonders of nature. They encourage people to learn more about the natural world.”

For many decades, the Audubon Society of Rhode Island has dedicated both staff and resources to caring for raptors. Although Audubon is not licensed to rehabilitate wildlife, we work with rehabilitators across the Northeast to provide forever homes for previously injured birds.

Audubon has recently adopted a second Common Raven and an Eastern Screech-Owl. The new additions make for a full nest over at Audubon, as we care for 12 rehabilitated birds that are unable to be released into the wild.

These birds are provided with species-specific diets, training and enrichment. They live in custom aviaries that are designed according to federal regulations. Audubon’s raptor handlers are trained and experienced in the care of birds of prey, and are extremely passionate about their work and the birds they care for.

Through the Sponsor-a-Raptor program, YOU can help care for Audubon’s birds by providing food, housing and veterinary care. The staff expertise, diets and special care that Audubon provides for these previously injured birds cost thousands of dollars each year.

Your support allows our ambassadors to accompany Audubon educators on hundreds of visits to schools, community centers, assisted living homes and libraries each year. Your gift not only provides care for these special birds, it also supports our mission to connect people with nature.

Sponsor an Audubon raptor event for your library, school or community event.