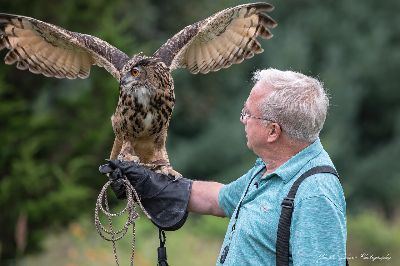 Pictured is Rick West of Westy's Birds of Prey and a Eurasian Eagle Owl at Audubon's Raptor Weekend. This non-native bird would not be allowed at the event if Senate Bill 0167 were to pass. Photo courtesy of Charles Ledoux.

Please Help Us Stop this Bill!

Environmental education is critical to the mission of Audubon. We are the state’s largest environmental educator giving school children across our entire state meaningful, experiential connections with nature. For some students, this is their first “touch” of nature.

Central to our education program is the use of our animal ambassadors… that bring nature to life in the classroom. These programs ignite many students interest in science and the natural world.

Senate Bill (S0167) introduced by Senators Lynch Prata, Coyne and Archambault was introduced on January 24 with the purpose of prohibiting wild or exotic species in “traveling animal acts.” Defined as “any performance which requires an animal to be transported to or from the location of the performance in a mobile or traveling housing facility.”

Many of our animal ambassadors are not native to Rhode Island and would be considered under this bill to be “exotic” and certainly “wild.”

The bill would prevent hundreds of our most popular and life-changing programs from happening at local schools and with scout groups. It will also have a significant impact on Raptor Weekend, New England’s largest raptor festival and Audubon’s largest public program.

Please contact your state senator and members of the Judiciary Committee to oppose Senate Bill S-0167. If you don’t know who your senator is, use the Voter Information Center's "Find Your Elected Officials" tool.

Emails are good, calls are even better.

Sample Letter to Senators
If you don’t know who your senator is, use the Voter Information Center's "Find Your Elected Officials" tool.
This letter may also be sent to Senate Judiciary Committee Members if you do not wish to sign our petition!

As a member of the Audubon Society of Rhode Island, Rhode Island’s leading environmental educator, and an active voter I ask you to Oppose Senate Bill 0167.

This bill bans much more than elephants in circuses or lions jumping through rings. It is a ban on taking well-cared for educational animals to programs for local school children, scouts and the public.

Basically, if an Audubon educator were to take an animal, non-native to Rhode Island and place it into a vehicle and takes it to any location where someone will see it, other than a veterinarian in a private room, then this educator would be breaking the law.

The environmental programs offered by the Audubon Society are provided by responsible, trained animal handlers who provide educational services to thousands upon thousands of children and groups at schools, libraries, Scout meetings, and other gatherings through out our state.

This bill would make illegal the hundreds of beneficial, educational outreach programs performed each year by Audubon. These programs allow children to actually see these animals in person. Books and videos are great, but seeing live animals leads to much greater appreciation and fuels the desire to learn, and to conserve animals and their habitats.

Prohibitions such as this proposed ban demonstrate an irrational approach over common sense. Similar performance bans do exist in some places. However, the language used in this bill is far more restrictive and unreasonable.

Thank you for by stopping S0167 in its tracks.

Sincerely,
Your Name
Your Address