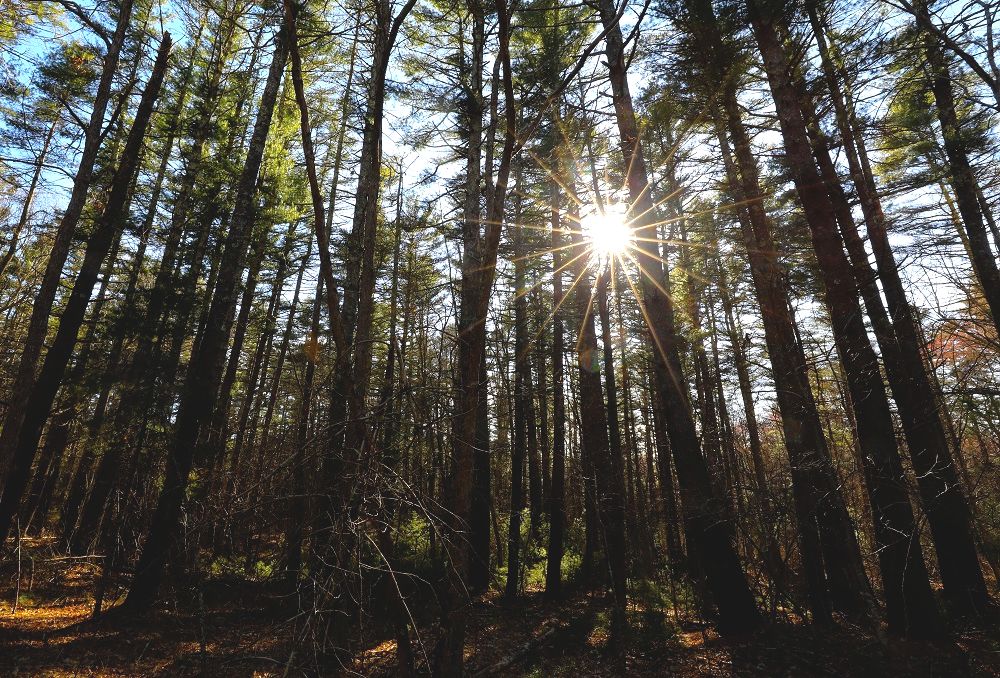 The Fight to Protect Our Forests

Fisherville, a mosaic of five properties acquired since 1988 that now totals 1,010-acres, is an ideal place to observe the important role that forests play in providing habitat for a diversity of wildlife. It’s also representative of the abundance of ecosystem services that forests contribute to the region’s human population, from protecting the water quality in local aquifers and sequestering carbon from the atmosphere to cooling the environment, reducing soil erosion and providing a stress-free place for rest, recreation and rejuvenation.

"Wetlands, farmland, coastal lands and soils are all protected in the state, but not upland woods,” said Audubon Executive Director Lawrence Taft as he walked through Fisherville. “Forests like this have no standing under the law in Rhode Island. There is no grand plan or incentive for people to use or protect or appreciate the environmental services they provide.”

Forested lands have been under increasing threat in recent years. Over the past century, the primary threat to Rhode Island’s wildlife and their habitats came from the conversion of land for housing and urban growth and for commercial, industrial and transportation uses. But the past two years have seen accelerated destruction of forests as rural lands are developed to support renewable energy infrastructure.

The bill directs the RI Department of Environmental Management (RI DEM) to develop a program of actions, including guidance for property owners, for maintaining woodland health and diversity and to provide for woodland stewardship and urban forestry. Recognizing that some woodlands have special ecological significance, RI DEM will also be required to provide guidance for cities and towns to designate specific areas as having significant natural woodland features.  The agency will be guided by a community advisory council with diverse membership and expertise.

“Audubon is leading the charge on this bill because we’ve spent a lot of time in the solar siting conversation, and it became clear to us that there is an urgency around the issue,” said Meg Kerr, Audubon’s senior director of policy. “But we need more conversation around why these upland areas are important and should be protected. It’s not just a solar issue. We need to get our leaders focused on the issue of forest conservation.

“About one third of Rhode Island’s land has been identified in the state’s Wildlife Action Plan as critically important. That’s a lot of land,” she added. “We think more analysis needs to be done and priorities set, and we need to put our collective resources together about how to work with the owners of the priority lands to conserve those areas.”

Nearly 70 percent of wooded areas in the state are privately owned. And products that are produced from wood grown in these private forests contribute $700 million to the state’s economy – and 3,000 jobs.

Another reason to support the legislation’s call for forest conservation is to ensure that protected habitats are connected so wildlife can move about safely. This is especially important as the changing climate is forcing wildlife to adapt to changing environmental conditions, which will require many species to travel widely along migration corridors to find acceptable habitat in new locations.

In addition to concerns over the clearing of forests for solar facilities, the proposed site for Invenergy’s massive gas-fired power plant in Burrillville is a critical link connecting protected forest habitat, further illustrating the need for coordinated planning for woodland and forest protection in Rhode Island. 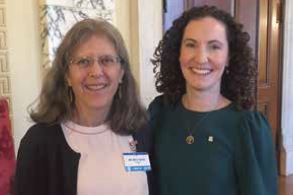 Audubon Senior Director of Policy Meg Kerr with
Senator Bridget Valverde, sponsor of the Woodland
Preservation and Stewardship Act of 2019. Kerr
attended the Arbor day event at the RI Statehouse
(May 9, 2019) to encourage support of the bill.

The Rhode Island House and Senate held hearings on the proposed legislation in April, and many individuals and organizations registered their support, including The Nature Conservancy, Save the Bay, and the Environmental Council of Rhode Island. Other allies, like the Rhode Island Farm Bureau and the League of Cities and Towns, indicated they do not oppose the bill.

Some expressed reservations, however. The Rhode Island Forest Conservation Organization noted that the Rhode Island Woodland Partnership has been preparing a plan of forest conservation strategies for some time, and they suggested that the bill is putting the cart before the horse and should wait until their plan is finalized. “We don’t disagree,” Kerr said. “But our intent is to start the conversation now so we’ll be open and ready for their recommendations when we pursue the legislation again next year.”

Other opponents fear the slippery slope of government over-reach and the potential that DEM or the state may eventually be able to tell property owners what they can and cannot do with their land. But nothing in the language of the legislation suggests that would occur.  The bill will not take any land or affect the rights of private property owners. In fact, as the largest private landowner in Rhode Island, Audubon supports the bill in part because it recognizes landowner rights and helps to create state-wide strategies for effective land use and conservation.

After the two hearings, the legislation was held in committee for further study. In the meantime, Audubon and its allies are continuing to meet with supporters and those who have concerns about the legislation to discuss recommendations for amendments and to continue the conversation about the need for forest conservation legislation in anticipation of reintroducing the bill next year.

“We really need to address this issue,” Kerr said. “We’re completely open and interested in policy solutions that would address the concerns we’re raising.”

Back at Fisherville Brook, Taft and Ruhren strolled through towering pines and pointed out yet another singing pine warbler.

“We’re looking at the role that forests play and trying to ensure they will continue in that role going forward,” Taft concluded. “We want to get forests in the language of the law, because when natural resources are referenced in our laws, forests are absent, as if they don’t even exist. We’re trying to change that.”

Todd McLeish is a life-long birder, freelance science writer and author of several books about wildlife, including Return of the Sea Otter.