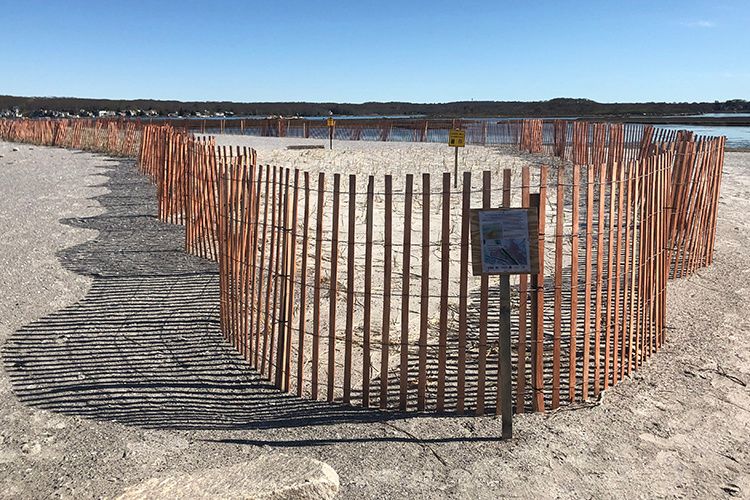 Each summer for the past 10 years, I have conducted salt marsh bird surveys at Quonochontaug Salt Marsh in Charlestown for the US Environmental Protection Agency. It’s been insightful to see the trends regarding the Saltmarsh Sparrows that breed there. Over the years, their numbers have stayed pretty consistent. As many of you know, Saltmarsh Sparrows nest very close to the ground in the salt marsh grasses. If these birds are not able to time their nesting just right, their nest will flood on the highest tide of the month and the young will not survive. With sea levels rising due to climate change, Saltmarsh Sparrows are in real danger. Their population has dropped nearly 85% in the last 20 years and scientists are predicting we will lose this species entirely by 2050. 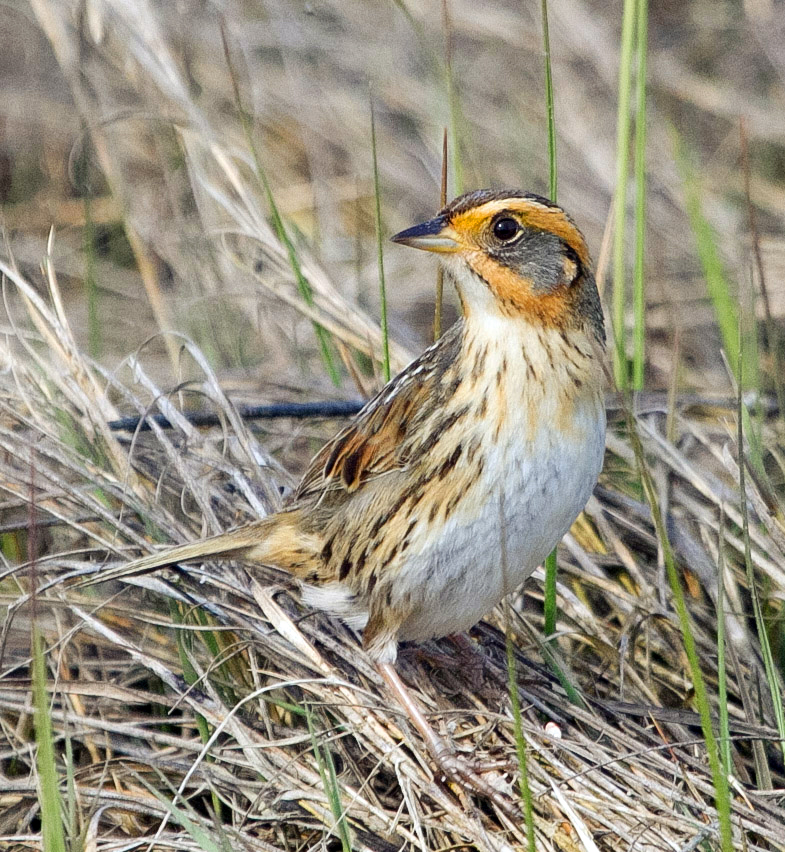 In the winter of 2019 the Quonochontaug Breachway was dredged to help with both navigation of the waterway and to try and restore the marsh to a higher level. The sand that was dredged from the bottom of the pond was spread on top of the marsh. At first glance, it looked like a new beach had been created. But with careful grading, the marsh was raised to a level that would be more sustainable for both plants and birds. Native grasses have been planted in the raised, sandy area, but I was convinced that we would find no Saltmarsh Sparrows this year. However, the very back of the marsh is owned by Audubon, and did not need restoration. To my pleasant surprise, I found approximately 12 Saltmarsh Sparrows singing and setting up territories. The part of the marsh undergoing restoration was mostly barren of birds and I realized that we lost some nesting habitat this year, but I was thrilled the sparrows were still utilizing the untouched area. If the plants re-colonize in the restored marsh, it should become habitat that hopefully will host even more sparrows.

While conducting a second survey, I noticed a bird I hadn’t recorded on this marsh before: an Oystercatcher. I didn’t give it too much thought, but two weeks later I found 10 Oystercatchers and they were clearly displaying! There is a good chance that these birds were looking to nest in this area.  I question if they will remain, with the amount of people using the area to quahog.

As for the section of marsh with the sparrows, I found about the same amount of Saltmarsh Sparrows. Usually I find fledglings during my second survey, and was disappointed that I found none. But it was a very wet spring and many birds had a rough year raising young.  As for the plants, after two weeks I could already see some self-seeding. It doesn’t look like a marsh quite yet, but the recovery has begun.

I am grateful to be part of this project. I am curious to see if the numbers of Saltmarsh Sparrows will change. And as I have also recorded the loss of any breeding Seaside Sparrows in this marsh, I am interested, and hopeful, to see if any of that species will return.

Joining with concerned environmental and scientific organizations across the country, the Audubon Society of Rhode Island recommends the cessation of bird feeding at this time. If homeowners are unable or unwilling to stop feeding birds, efforts should be made to clean feeders regularly to reduce transmission risk. Should you encounter any wild birds that appear sick, please discontinue feeding immediately. Dead and dying wild birds should be reported to the RI Department of Environmental Management, Division of Fish and Wildlife of by calling 401-789-0281. Click to read more.

The job of being a bird is arguably harder now than at any point in their long evolution and each and every one of us has the power to make a difference in the lives of birds - every day.