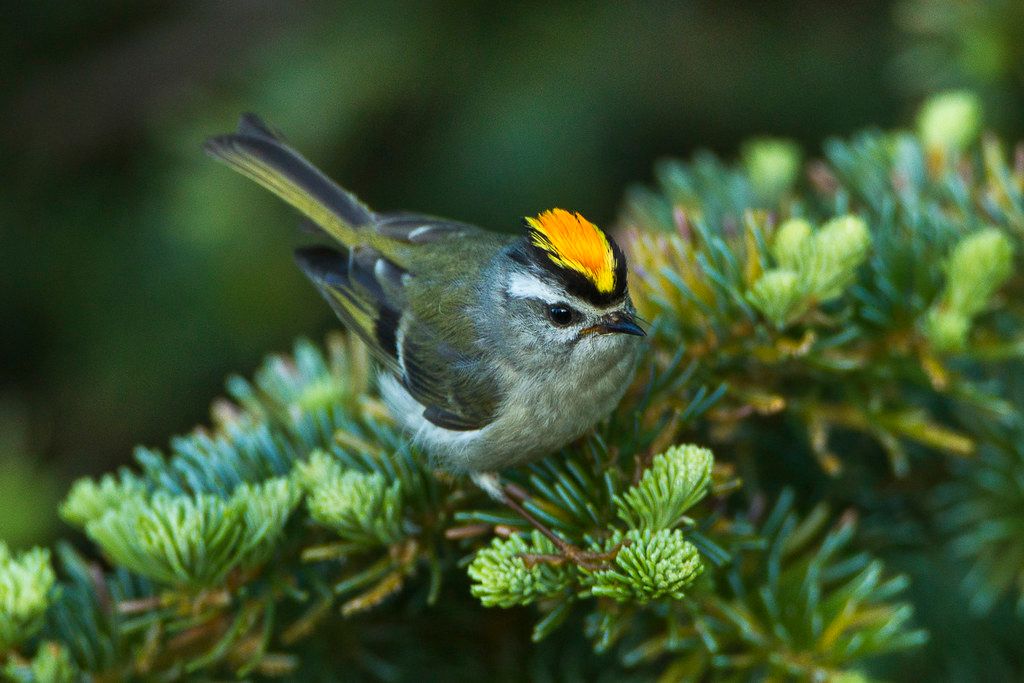 Let’s Go Birding | Be on the Lookout for a Flashy Golden Crown!

Please read our guidelines for enjoying the trails safely during these unique times.
_

While taking a walk with my friend this weekend, we were struck by the fact that we were never far from the high-pitched chirps of birds who were in contact with each other. This four-mile hike, deep into a hemlock forest with a babbling brook running alongside us, was the perfect setting to find one of the tiniest passerines in New England, the Golden-crowned Kinglet. Despite being so small, this tiny bird can survive in temperatures up to -40 degrees Fahrenheit with the help of its friends. They are often found huddled together in cavities to survive those cold nights. The bird’s high metabolism keeps them constantly on the move to find food as they search for insect larvae, mites, lice and seeds. The quick flick of their wings is a giveaway in identifying them high up in the trees. Golden-crowned Kinglets are constantly letting out high pitched chirps to let their friends know their location, as they build mixed flocks with Black-capped Chickadees, Brown Creepers, Nuthatches, and other songbirds.

Just over three inches in length, the Golden-crowned Kinglet has a back of olive gray, with lighter gray below, two whitish wing bars, a bold white and black striped face and a flashy golden-crown. Males have an orange/red crown that can be seen when agitated. These birds are monogamous and nest mostly in the northern boreal forest of North America. However, they can also be found nesting in small numbers in Rhode Island and the mountains of Appalachia. These small creatures often produce two broods which is an incredible feat if you think about the small window of its breeding season in the northern forests.

Working together, the female and male construct a 3-inch cupped nest made of spider webs, moss, lichen and bark. They line the cup with feathers and fur to keep the chicks warm on cool nights. Here the female lays 3 to 11 eggs. Yes, I did say 11 eggs. She sits in the nest for 15 days before the eggs hatch, then both parents feed the chicks for 15 to 16 days before they fledge. At this point, the female immediately lays 3 to 11 more eggs. And the male is now in charge of feeding and raising the fledglings and feeding the female. Once the second brood hatches, the first batch is on its own. Shortly after raising the second brood, the pair makes it way to winter grounds, some of these birds venturing all the way to Mexico.

Unfortunately, the Golden-Crowned Kinglet population is in decline, with a loss of approximately 2.5% of the population each year. Habitat loss and logging has taken a huge toll. On a positive note, the kinglet population has actually increased in the East due to the replanting of spruce forests in states such as Pennsylvania, Ohio, and Illinois. I urge you to head out into the forest before spring arrives, as that is when most of these birds will head north. If you find a mixed flock of birds, look for the flickering wings of a tiny songbird and listen for their high pitched chirps. Despite their size, they are sturdy, determined and can make it through the harshest of conditions with a little help from their friends.

I hope to see you on the trails!