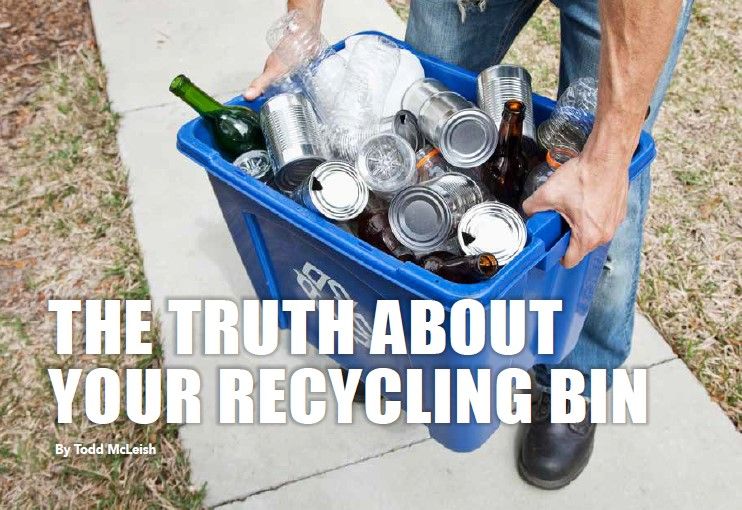 The Truth About Your Recycling Bin

Approximately 62,500 tons of plastics ended up in the landfill in Rhode Island in 2015. Half of it could have been recycled through one of the state's recycling programs.

At first glance, the inside of the Rhode Island Municipal Recycling Facility in Johnston is a complex maze of conveyor belts, walkways and giant green machines with yellow and orange highlights, something like you might imagine at an old-fashioned industrial processing plant. But the unseen technology it uses to sort the massive quantities of recyclable materials generated by Rhode Islanders is impressive.

A recent tour started at the tipping room floor, where trucks lined up to dump their load of mixed recyclables — collected curbside from residents throughout the state — on the cement floor of a giant open-ended warehouse-like structure. That’s where workers quickly assess whether the load is contaminated with too many items that cannot be recycled in the facility, like plastic bags, propane tanks, televisions and plastic coat hangers. If the load contains more than 10 percent non-recyclable materials, it is rejected and everything goes into the landfill (though more often than not, loads aren’t rejected unless they contain closer to 30 percent of non-recyclable material).

Plastics are dropped below to a final conveyor, where another optical scanner separates it by color — clear, colored and natural (think gallon milk jugs). From there, the plastic goes through a bailing machine that spits out 4-foot square bails of plastics, which are stacked five high and six deep around three walls of the bailing room. Trucks from companies seeking to acquire the materials then back up to the adjacent loading dock to pick up whatever they need.

“There’s a lot of moving parts here,” Rhodes said. “This is the end of the line. And the beginning of another one.”

The Municipal Recycling Facility is an efficient system for sorting plastics and other recyclable materials and preparing them for pick-up by those seeking the raw materials, but far too much of it is contaminated by items that should not be placed in the recycling bin in the first place. And Rhode Islanders recycle just 25 percent of their trash via their recycling bin.

Plastics are a huge part of the problem. Rhodes points out that just nine percent of all the plastic ever produced has been recycled, and plastics production is expected to grow by 40 percent by 2025. About 78 million tons of plastic packaging are produced every year around the world, and 40 percent of it ends up in a landfill somewhere. The situation in Rhode Island isn’t any better.

About 62,500 tons of plastics ended up in the landfill in Rhode Island in 2015, according to Krystal Noiseaux, the former education and outreach manager at Rhode Island Resource Recovery.  Half of it could have been recycled through one of the state’s recycling programs.

Not doing so has significant implications.

Because plastics do not biodegrade, the growing quantities of plastics that end up in the landfill have serious ramifications on the life expectancy of Rhode Island’s Central Landfill. At the current rate of trash being landfilled in the state, the landfill is expected to run out of space in 2034. And while there is a planning process under way to determine how to address future waste disposal needs, there is little space available to expand the landfill at the current site.

“No other city or town is jumping to be the next home of a landfill,” Noiseaux said. “We’re prohibited by law from operating any waste-to-energy facility. Other states are putting trash on rail and sending it to the South or Midwest where there is plenty of space, but getting it there is going to be more costly for Rhode Islanders.”

To address some of these issues, some companies are now making products that they claim are compostable or biodegradable, like utensils and plates, but most are designed to be composted in commercial compost facilities, not in backyard compost bins.

“They’re not biodegradable in the way that people imagine once they’re buried in a landfill,” said Noiseaux. “The thought that these things are going to magically biodegrade in the trash isn’t accurate. There isn’t a recycling program for compostable utensils, so it’s going to the trash. And small odds and ends like that have a tendency, between your house and its final burial, to end up in the environment as litter.”

Audubon has been making great strides in reducing its use of plastics and increasing its recycling rate in its daily operations. It has paid particular attention to eliminating single-use plastics at its major events, which hasn’t been easy, considering the popularity of the events and the complexity of meeting the expectations of those in attendance.

During Raptor Weekend, for instance, which attracts over 2,000 people annually, Audubon used to sell about 600 plastic bottles of water each year. Now, in an effort to reduce the event’s carbon footprint, Audubon sells none. Instead, attendees purchase 25-cent compostable cups that they fill at a large water cooler donated by Crystal Springs. Other beverages are available in cans or bottles that are more easily and more completely recycled than plastic bottles. Plastic straws are no longer available at the event either, though reusable metal straws may be purchased in the gift shop.