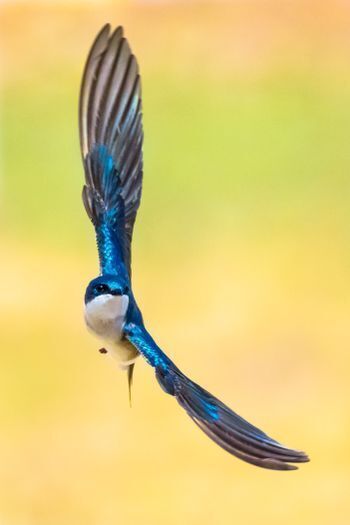 As the summer heat ramped up in July, I noticed the Tree Swallows leaving the fields of Fisherville and heading to the coast. Fall is one of my favorite times of year. I love the cooler temperatures and going down to the beach and seeing hundreds of thousands of swallows gathering before they head out on their southerly migration. If you have never seen this phenomenon, it is truly a sight to behold.

Rhode Island is home to breeding Tree Swallows, Barn Swallows, Bank Swallows, and Rough-winged Swallows. But I will focus on Tree Swallows, since they are found in the largest numbers in the fall. These birds are cavity nesters that make their homes in old woodpecker holes and nest boxes that are often put up for Eastern Bluebirds. They have an iridescent blue back and white chest. We love to have them at Fisherville as they often feed on hundreds of mosquitoes a day. Just after fledging the last of their young, these birds head to the coast to join other swallows in what we call their staging grounds.

From August to October Tree Swallows slowly migrate down the coast to their wintering grounds in Florida, the Caribbean, and Central America. They take their time migrating South, it might take them three or four months to reach their destination. They stop along the way at these staging grounds to eat and fatten up until they reach their next stop. Tree Swallows feed on insects and berries that are found in coastal marshes. In the morning these birds rise from the reeds and search for food throughout the day. Come dusk, you can see a black cloud of 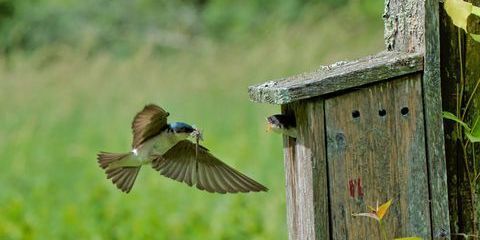 hundreds of thousands of swallows circling and swirling over the marsh. One brave individual will dive into the reeds, and they all funnel down together and...poof! They disappear as if they were never there at all.

So why do they gather in these large flocks? There are several theories. One is for the juveniles to learn from the adults. Tree Swallows quickly move from their breeding grounds to the coast to feed in late July and August. Marshes have a large abundance of mosquitoes and other flying insects to consume. They are also a place to find fattening myrtle and bayberries. The juveniles can practice their insect catching skills and follow the adults to staging grounds and on to their final destinations.

Secondly, there is safety in numbers. If you are in a flock of thousands and the birds are moving in all different directions, it is harder for predators to pick out an individual to catch. With so many other birds around, your chance for survival increases. Also, a large group of swallows offers more eyes and ears looking and listening for predators. It is more likely a predator will be found before it can become a threat.

In Rhode Island, Charlestown Breachway, East Beach, Quonochontaug Breachway, and Napatree Point are great spots to look for these swallow staging grounds. During the day you can witness thousands of birds hunting for insects, and in the evening you can watch the clouds of birds moving together before they plummet into the reeds. Look for this phenomenon all along the eastern coastline throughout the fall. This is also a great time to learn the different species of swallows listed above and keep your eye open for a few rarer swallows like the Cliff and Cave Swallows. Happy Birding!

Swallow Spectacular on the Connecticut River

Join Audubon on a river journey from Essex, CT to see the spectacular swallow display. Led by Audubon naturalist Kim Calcagno. For more information and to register, visit asri.org/calendar.