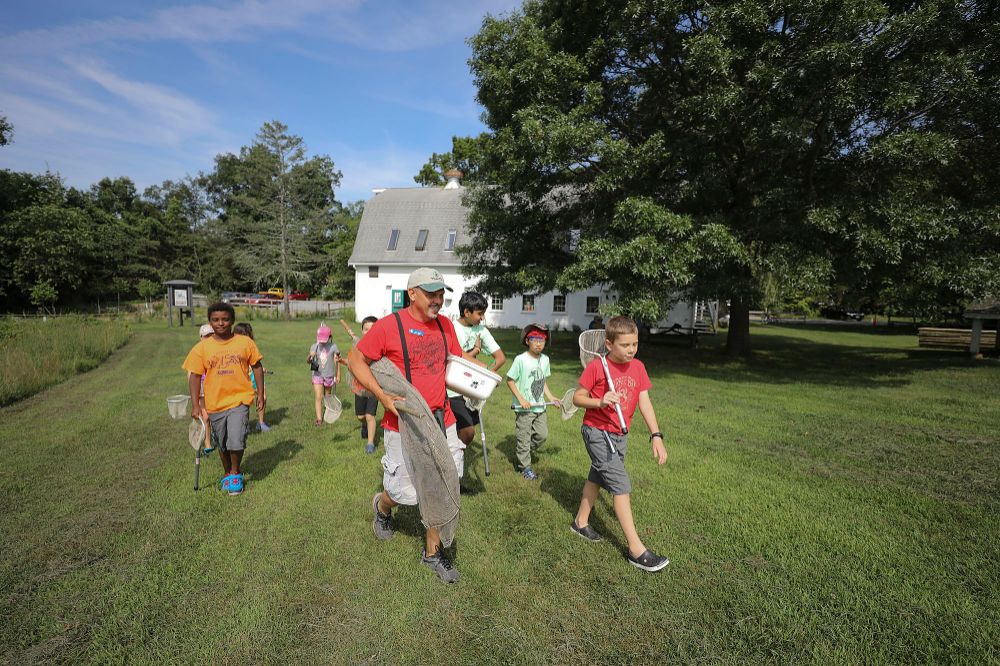 The word caratunk in the Algonquin language means “where the rivers meet.” It’s an apt name for Audubon’s very popular wildlife refuge in Seekonk, where Cole’s Brook intersects with an unnamed stream amid ponds, forests, meadows and wetlands. The Caratunk Wildlife Refuge has experienced a number of improvements in recent years, making it an even more valuable site for environmental education, wildlife watching, or a quiet hike. 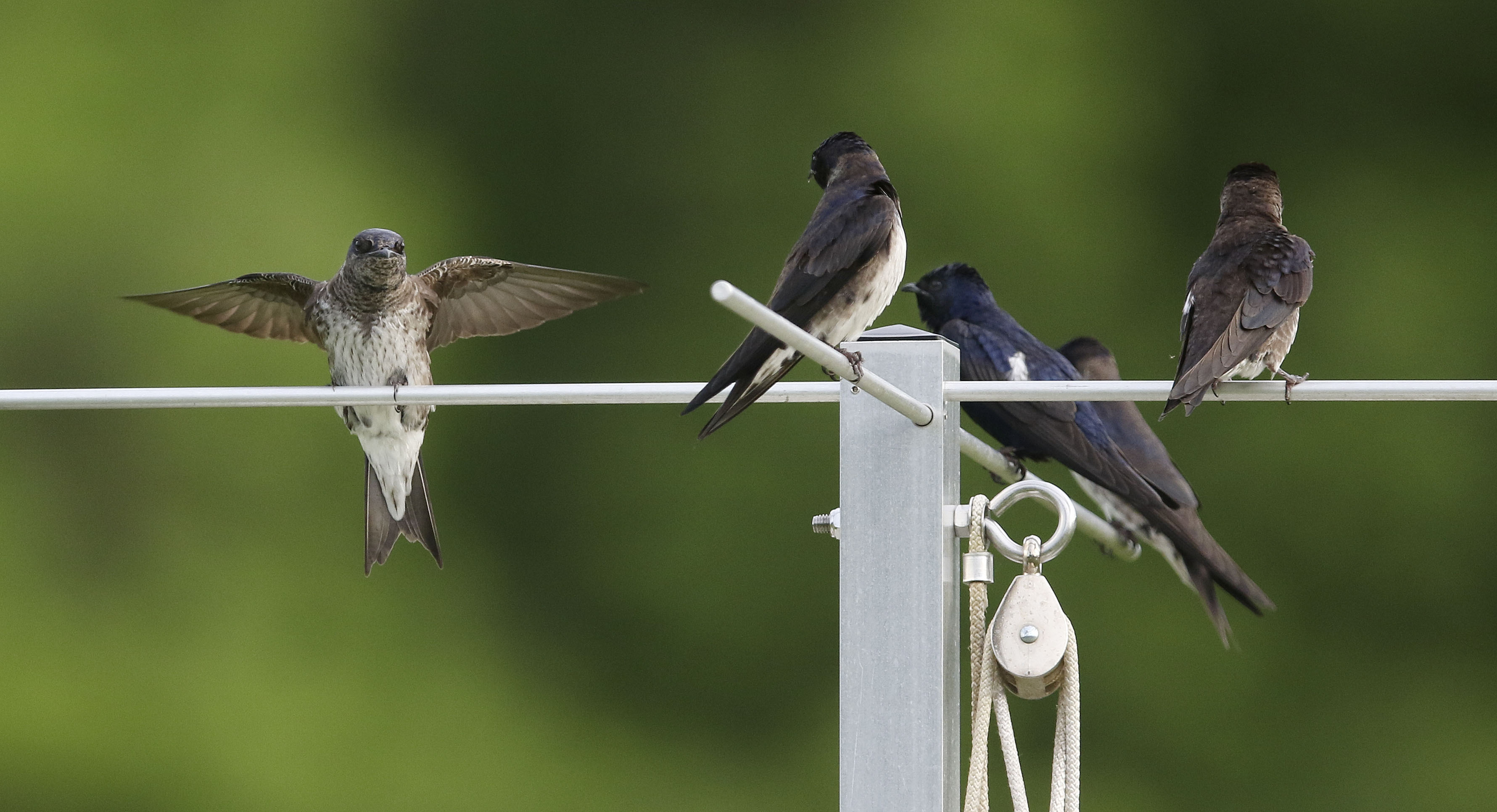 In July, the property was ablaze with wildflowers in the meadow just beyond the parking lot. Asters, milkweed, black-eyed susans and many others fought for space among flowering shrubs and berry-covered vines while a dozen pairs of Purple Martins were busy raising their families in the gourd houses that serve as the centerpiece of the first field.

House Wrens, Eastern Bluebirds and Tree Swallows appeared to have come to an agreement to share the numerous traditional birdhouses scattered around the property, but they weren’t quiet about it. Each twittered and warbled as they staked a claim to one house or another and defended it vigorously while racing about finding food for their growing young. Butterflies and dragonflies made their presence known as well, as did several large bullfrogs at Muskrat Pond – a reliable place to observe river otters – and uncounted noisy Catbirds. A Green Heron flew overhead and landed out of sight in a wet corner of the property. 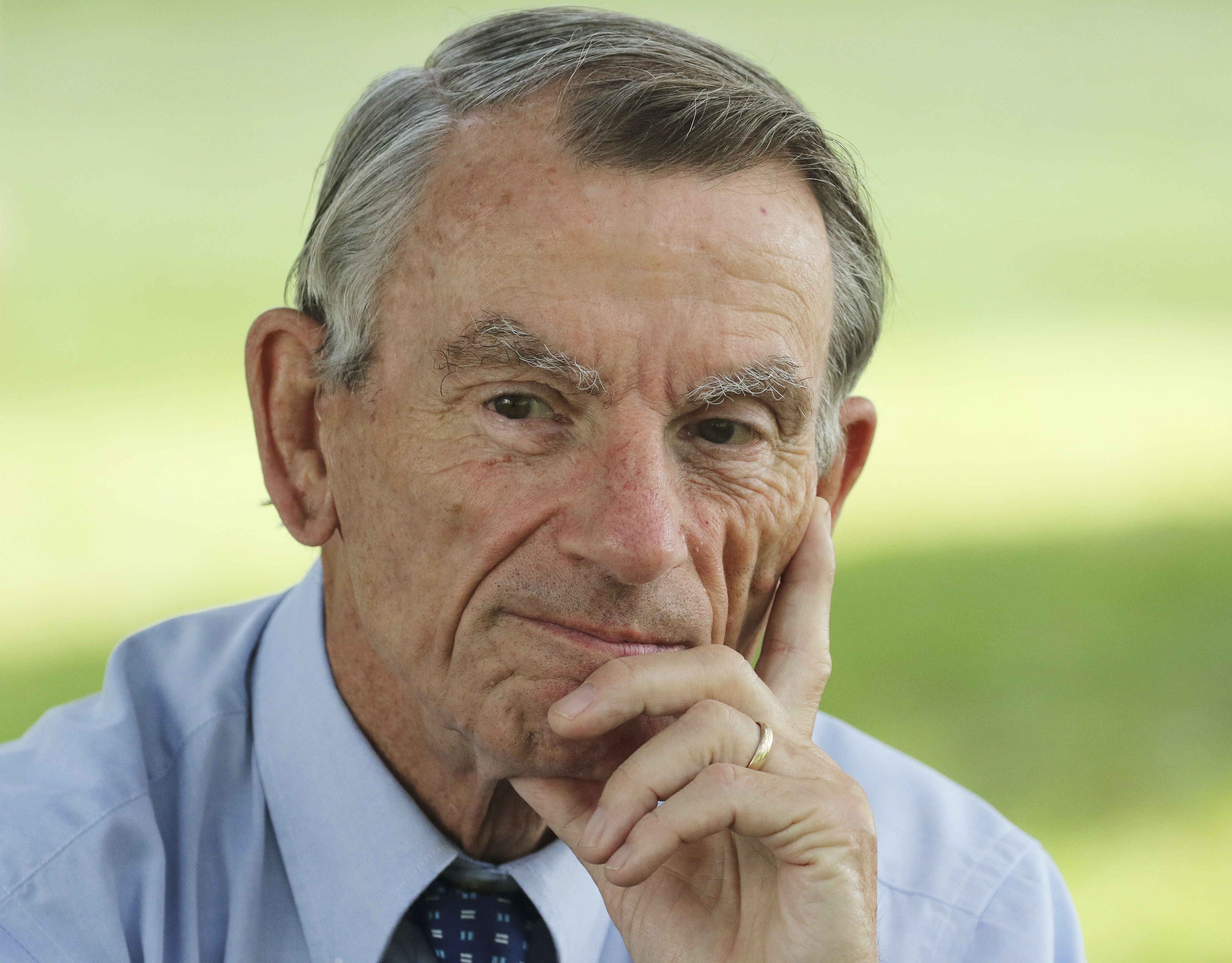 Nate Chace has been visiting Caratunk at least a couple times each month for many years to hike and commune with nature. A member of Audubon’s board of directors who has been involved in hiking and trail work his entire adult life, Chace appreciates the easy access to the property from his home in Riverside and the extensive trail network through varied habitat. But he also recognized that the trails could be somewhat confusing, and he occasionally bumped into worried hikers who had been wandering around aimlessly trying to find their way back to their vehicles.

“One day I talked to a guy in the woods who said he liked to forge his own trail,” he said, “and later that day I saw two women who said they only walk in the field because they get lost when they go in the woods. It was obvious that something had to be done about the trails.”

Chace wasn’t the only one who recognized the problem. 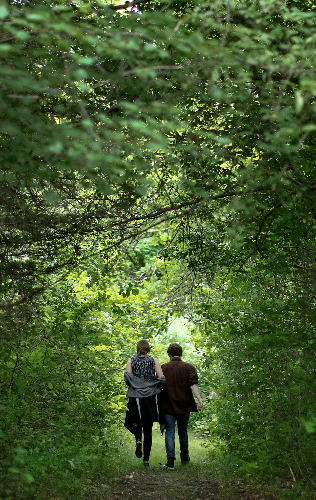 “We just had too many trails, many of which cut across sensitive habitat like a vernal pool, and sometimes people turned around and got confused trying to find their way,” said Scott Ruhren, Audubon’s Senior Director of Conservation.

“Certain paths became trails not because we planned it that way but because some groups always hiked a particular route, and sometimes side trails were created and it all became confusing,” added Executive Director Larry Taft. “Nate convinced me that we needed a simpler system – a well-marked and very obvious trail system – and he took it upon himself to make it happen.”

It took him about a year, but with the help of fellow board member and cartographer Terry Meyer, Chace laid out a simple loop trail that begins and ends at the parking lot, then added several side loops that take visitors to notable features of the property, like Muskrat Pond and a hemlock grove.

No new trails were blazed in the process, but several old ones were closed and are being allowed to fill in with native vegetation. A new trail map was produced as well, and several signs were installed at trail intersections indicating “you are here” and providing GPS coordinates.

The Caratunk Wildlife Refuge was voted Audubon’s favorite refuge to hike in a 2012 survey of Audubon members. Its popularity is due in part to its location close to the metro Providence area, enabling a large segment of the population to only have to travel a short distance to enjoy its trails and programs. The four parcels that make up its approximately 200 acres were acquired between 1969 and 1986, most of it donated by Charles G. Greenhalgh. Even though the property is across the Rhode Island border in Massachusetts, then-Audubon executive director Al Hawkes recognized that its location was ideal, especially since the only other public refuges Audubon owned at the time were located far from the city. 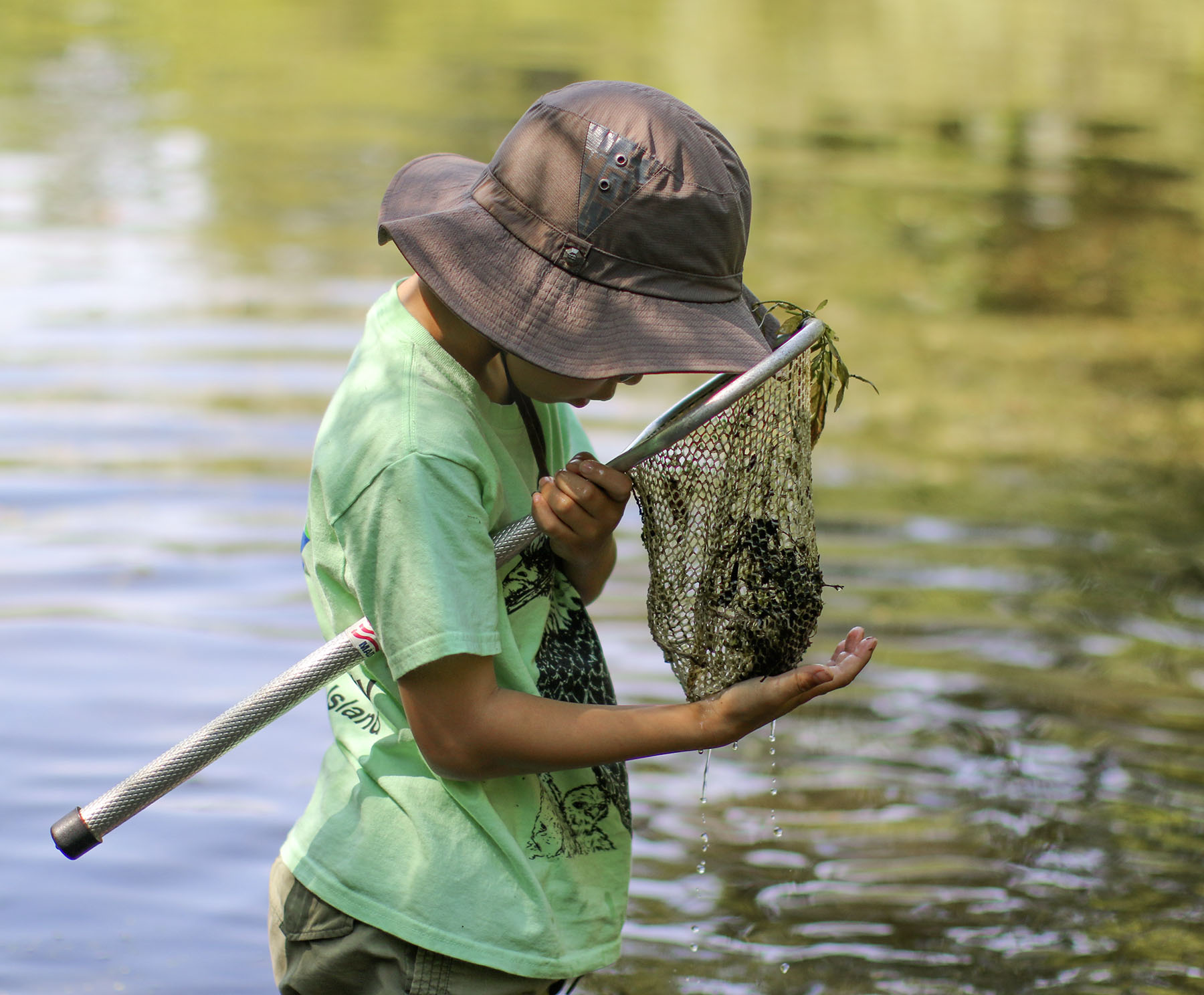 During the 1970s and 80s, Caratunk was a hub of Audubon’s public activities, with several full-time staff members based there and numerous programs, school field trips, camps and events scheduled year-round. As the years progressed and Audubon grew, new facilities were built to accommodate larger groups with modernized facilities. Audubon opened its headquarters in Smithfield in 1987 and the Nature Center and Aquarium in Bristol in 2000. But through the years, Caratunk has remained a very popular destination for school programs, hiking and summer camps. The property’s high level of usage has meant it needed more than routine maintenance.

The dirt parking lot had been one hurdle to visitation because for several months each year it was a rutted, muddy mess, and water that ran off the lot settled around the foundation of the barn that serves as a nature center. So last summer, with the help of a grant from the Champlin Foundations and many donations from individuals, the parking lot was re-engineered to hold more cars and contoured so the water flows beneath the new gravel surface and into a newly-installed rain garden.

“Now the lot is bone dry, we’ve doubled its capacity for cars, it’s handicapped accessible, and we’ve opened up the entrance to the lot to make the place feel more welcoming, friendly and inviting,” said Taft. “It couldn’t have turned out better.”

The adjacent rain garden was designed to use a series of slopes and well-placed rocks to divert water into the garden to allow sediments to settle before the water continues on its way to the nearby wetland. And the numerous flowering plants blooming for the first time this summer are also attractive to pollinators.

But that’s not the end of the recent Caratunk improvements.

To help orient new visitors, the property now has a new information kiosk located at the entrance to the perimeter trail that provides details about programs, a trail map, and other timely information. Another kiosk now serves to describe how the new rain garden functions.

In addition, the barn – originally located far in the distance when the property was first acquired and moved closer to the road in the 1970s – has had upgrades to its lighting and heating systems.

“The last time the barn was renovated was in 1986 or ’87, and it desperately needed attention,” Taft said. “The big hall upstairs gets beastly hot in summer and we had to close it in winter because it was too costly to heat. We wanted to make improvements so that it wouldn’t cost an arm and a leg to heat. With these upgrades, the building will become more energy efficient, so we can make use of it all year long.”

In the process of restoring the grassland habitat, turtle nesting habitat was created in targeted locations by providing areas of unvegetated loose soil where spotted turtles, box turtles and snapping turtles can lay their eggs. And a number of dead trees throughout the property have been intentionally saved to create snags and cavities for nesting birds like Great Crested Flycatchers, Wood Ducks, and Screech Owls, as well as shelter for flying squirrels and other mammals. 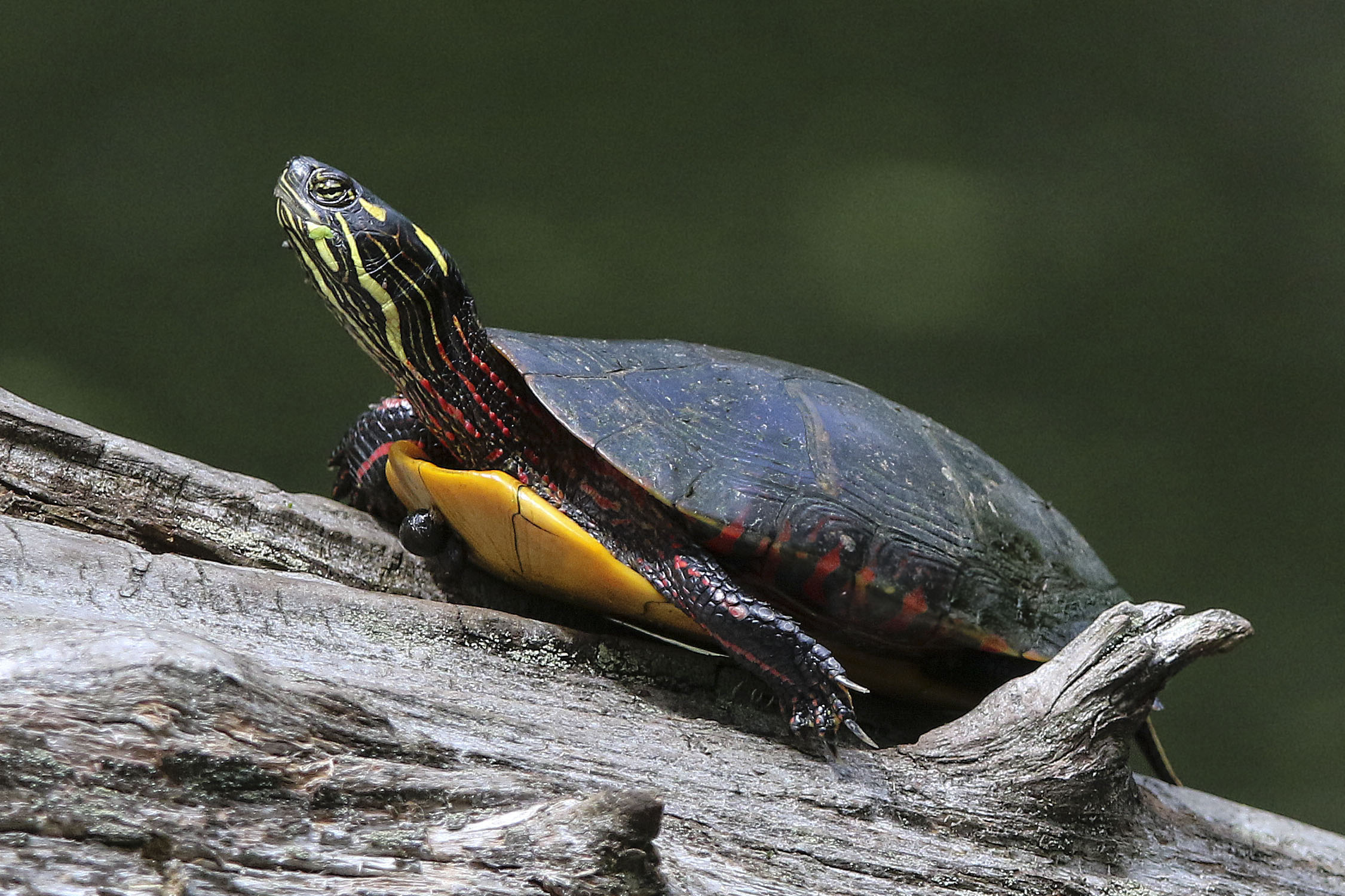 Not all the improvements being made to the refuge have been completed. Modest upgrades to the milk shed – the small building with attached greenhouse behind the barn that is used for equipment storage and to raise plants in spring – are in the works. And a series of movable boardwalks are being built for temporary usage along areas of the trails that drain poorly and remain wet after heavy rains.

“People sometimes love this place to death,” said Ruhren, “we need this kind of active management so the refuge doesn’t get abused.”

Caratunk continues to be one of Audubon’s most visited refuges, with numerous cars filling the parking lot during spring and fall weekends and a very busy schedule of summer camps and programs. In winter, its relatively flat landscape makes it a popular destination for snowshoeing and cross-country skiing. That’s also when it’s easiest to find signs of muskrats, otters and fishers.

“With all of these improvements, I feel like this facility is in the blossoming stage,” concluded Chace. “And that means we have a whole new set of challenges – more use of the trails means more maintenance needs. But Caratunk is evolving, and it has a very bright future. It’s been great fun for me to be in on the ground floor of the changes. I treasure this place, and it means so much to me to see so many other people enjoying it as well.”

Photos in this article by Glenn Osmundson.