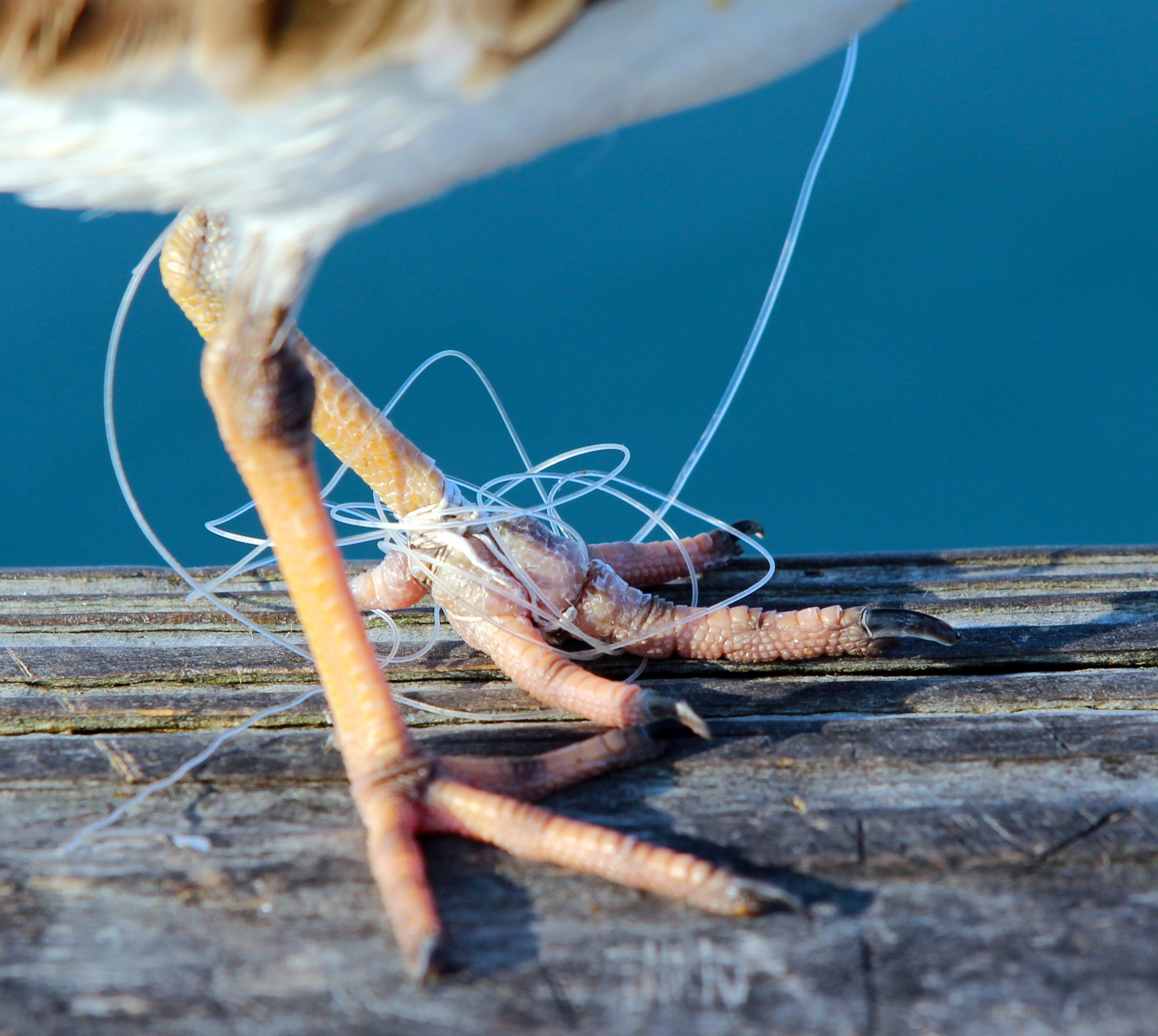 Almost every day, Geoff Dennis walks the beaches of Little Compton with his dog Koda and picks up the trash he sees along the way. Most of it he discards in a proper trash receptacle, but some of the plastic he finds – bottles, balloons and straws, for instance – is saved and recorded with a photograph at the end of the year to document its annual accumulation.

He estimates that about half of what he picks up is generated by local beachgoers and the other half from people and industries many miles away, since it shows evidence of having drifted on ocean currents for some time.

The growing problem of plastics pollution is due in part to our throw-away society and because plastic degrades very slowly in the environment. It persists for hundreds of years, at least. And unless we change our consumer behaviors and the plastics and packaging industries reform themselves, the problem won’t go away anytime soon. The recycling rate of plastics is floundering at dreadfully low levels while plastics production is expected to increase by about 40 percent by 2025.

Jamie Rhodes agrees. A Providence-based attorney who has been working on plastics reduction initiatives around the country for the last decade, he said that consumer product manufacturers and those who use plastic for packaging and shipping have no incentive to reduce their use of plastics because it costs so little and its creation is subsidized by the oil industry.

The plastics industry emerged after World War II as the oil industry sought uses for the byproducts of the process of refining crude oil into gasoline and other fuels.

“They realized that the chemicals that came from the fossil fuel refinement process could be turned into plastics, which are among the most flexible chemical compounds out there,” Rhodes said. “The growth of plastics was a way for the fossil fuel industry to find value in what had been an industrial byproduct. They were drilling for oil, and plastics became a byproduct.

“Now we’re at the point where the tail is wagging the dog,” he continued. “Our use of oil for transportation and heating is declining, and a lot of the large fossil fuel companies have realized that the future of oil extraction is in plastics. There has been a significant shift in oil extraction efforts to cater to the needs of the plastics industry. We’re now seeing a growth in the construction of cracking plants in the U.S., which crack the chemical chain into component parts for specialized plastic resins.”

Because plastic floats, small pieces are often accidentally consumed by seabirds, which may be the most likely wildlife to be harmed by plastic. University of Rhode Island Professor Peter Paton said the “classic example” is the Laysan and Black-footed Albatrosses on Midway Island in the Pacific, which soar for thousands of miles around the ocean in search of food and often bring pieces of plastic back to their nests to feed their chicks, sometimes pieces as large as toothbrushes.

“If you go to Midway, you see dead chicks everywhere with their crops and gizzards completely full of plastic,” said Paton, a member of the Audubon board of directors.

Closer to home, an ongoing study of chemical contaminants in the tissues of great shearwaters off the New England coast by a URI doctoral student turned into a study of plastics after she found plastic inside every one of the 350 dead birds on which she conducted a necropsy (an animal autopsy).

“It’s been quite jarring,” said Anna Robuck, who examined birds that were found dead between 2007 and 2019. “There hasn’t been a bird I’ve cut open that hasn’t had plastic in it. I’ve analyzed about 400 pieces of the plastics I found in the birds, and most are recyclable polyethylene.”

Among the plastics Robuck has found in Great Shearwaters are fragments of bottle caps, food wrappers and tangled up balls of microfibers. Most are smaller than 5 millimeters in size, which are considered microplastics, though many are considerably larger, large enough to pose a choking hazard. Some birds were found to have more than 100 pieces of plastic in their bodies, but they averaged 7 to 10.

While it is uncertain if the ingestion of plastic was the primary cause of death of the birds, it is likely to have been a contributing factor. And because chemical contaminants easily adhere to plastics, the plastics may also serve to deliver toxic chemicals to the birds and other animals that ingest them.

Not all plastics are equally hazardous when consumed by wildlife, however. Balloons are especially deadly.

A study published last summer by researchers in Australia found that balloons are more likely to kill seabirds than any other kind of plastic debris. In an evaluation of 1,733 dead seabirds, the researchers noted that 32 percent had ingested plastic debris. And while soft plastics like balloons accounted for only 5 percent of the items ingested, they were responsible for 42 percent of the seabird deaths. In addition, although just 2 percent of all ingested plastic were pieces of balloons, the birds that ingested balloon pieces were 32 times more likely to die than if the bird had ingested a hard plastic. According to the research team, balloons are especially lethal because they are easily swallowed and can squeeze into a bird’s stomach cavity, where they reduce the space available for food.

Examples abound of marine mammals and sea turtles being similarly affected by plastic pollution in the marine environment. A Cuvier’s beaked whale died on the coast of the Philippines last spring with 88 pounds of plastic in its stomach. A month later, a pregnant sperm whale in the Mediterranean Sea was found dead after having swallowed 55 pounds of plastic. Then there’s the harp seal found dead in Scotland with plastic wrappers in its intestines and the viral photo of the sea turtle with a plastic straw stuck in its nostril.

“When baleen whales feed, they aren’t selectively nibbling on their very tiny prey. They swim across the water with their mouths open, and they take in a lot of water and whatever else happens to be in the water,” said Janelle Shuh, the stranding coordinator at Mystic Aquarium. “When they filter the water out with their baleen, any plastics in the water get stuck inside their mouths.”

Shuh calls ocean plastics a significant problem for all species living in the ocean environment, and it’s a problem she sees regularly in the animals she rescues from beaches throughout the region. She regularly responds to calls about seals entangled in monofilament fishing line and other plastic debris, which often causes wounds and infections. She once conducted a necropsy on a dead harp seal and found several plastic bags in its stomach.

“I’ve also done plenty of sea turtle necropsies where we’ve seen plastics in their stomach and esophagus,” she said. “Leatherback turtles eat jellyfish, and a floating plastic bag can have the appearance of a jellyfish and they’ll eat it assuming it’s prey. Loggerheads also tend to have had plastics in their system. They munch on crabs on the sea bottom, and if there’s a plastic bottle cap down there, they might accidentally ingest it along with the crab.”

While it’s often difficult to determine whether the plastic items were the primary cause of death of the animals, Shuh believes the plastic is usually a contributing factor.

“Our narrative needs to shift,” she concluded. “I grew up in the 70s with the mantra of ‘reduce, reuse, recycle.’ But we’ve only really focused on recycling, and that’s becoming more challenging. We need to shift our mindset to ‘reduce and reuse’ so the materials aren’t getting into the environment in the first place. That’s the direction we need to go in now.”

*Cigarette butts are composed of thousands of cellulose acetate fibers, a microplastic that take years to disappear from the environment.